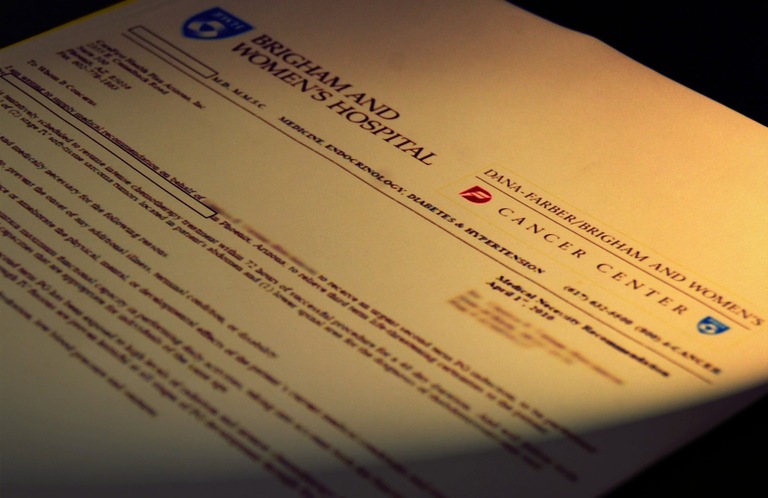 This fraudulent document, created by Chalice Zeitner and entered into evidence at her trial, falsely stated she had cancer and needed life-saving surgery by a certain date. She used this letter to receive a state-funded, late-term abortion.

An Arizona con artist will be spending the next 25 years behind bars after being convicted of 18 felonies in two separate trials related to her faking cancer and brazenly scamming veterans’ charities out of thousands of dollars.

Chalice Zeitner’s crimes were so outrageous, said FBI Special Agent Heather Rivera, “it’s unlike anything I have ever seen before.”

Zeitner, who skipped town and changed her name when she thought the heat was on, forged medical documents, stole identities, duped her boyfriend and physicians, and fabricated careers that included being a race car driver and a wealthy attorney who owned a law firm in South Africa. Along the way, she left a wake of victims.

Rivera, who investigated the case with Special Agent Suzanne Allen from the FBI’s Phoenix Division, noted that Zeitner seemed to make a career of lies and deception. “Sadly, her path in life was all about defrauding people who trusted her.”

Zeitner then fraudulently created documents from a Boston doctor stating she needed the life-saving surgery by a certain date. She took that document to her Phoenix OB-GYN, who petitioned the hospital to perform a state-funded, late-term abortion so his patient’s life-saving surgery could take place in Boston.

Her OB-GYN “had no reason to think she was lying,” Rivera said, “because who lies about having cancer?”

Shortly after the pregnancy termination, Zeitner’s boyfriend received a social media message supposedly from a family friend named Trinity stating that Zeitner was too proud to ask for help but she wanted to undergo a new type of cancer treatment in Mexico that was expensive. Trinity convinced the boyfriend to fundraise online for the treatment, and he did, raising more than $3,000.

“We are thankful that this individual is going to be off the streets for many years and won’t be able to take advantage of anyone else.”

Trinity, it turned out, was “a fake person Zeitner created to lend legitimacy to the scheme,” Allen said. Eventually, the boyfriend became suspicious when he was unable to meet Trinity in person, and doctors ultimately learned the truth about Zeitner through examinations during a subsequent pregnancy and cesarean delivery: She had never had cancer.

Her OB-GYN reported Zeitner to state medical authorities, and the Arizona Health Care Cost Containment System enlisted the FBI’s help to investigate. By that time, however, Zeitner was long gone, having moved to California and changed her name.

In California, Zeitner befriended a man who ran a charity on behalf of veterans. He hoped to create a motor racing team to help raise money, and Zeitner invented a story to gain his trust. “She claimed to be a race car driver who had connections in the industry,” said Allen. She also claimed to be a highly decorated veteran and falsified a military service record to support her claim. On behalf of the charity, Zeitner started planning—and raising money—for a black-tie gala in Washington, D.C. surrounding Veteran’s Day 2012.

“There is no evidence to back up any of Zeitner’s claims regarding her racing cars or military decorations,” Allen said, but Zeitner was persuasive. Although the gala never took place, before the scam unraveled Zeitner had stolen identities from the man and his family and used them to obtain credit cards to run up $25,000 in personal charges. Another veteran’s charity in Arizona was also scammed out of $15,000.

The FBI caught up with the con artist in May 2015. She had fraudulently changed her name to Al Serkez and was living in Georgia. After her arrest and return to Arizona, she was indicted by the state on 11 counts related to the health care fraud. A few months later, a separate state indictment charged her with defrauding the veterans’ charities.

Zeitner was deemed competent to stand trial. In both cases she mounted no defense but maintained her innocence. In April 2016, she was found guilty on the health care charges—among them, faking cancer to receive a government-funded, late-term abortion. In August 2016, after a separate trial, a jury convicted Zeitner on seven additional felony counts for scamming the veterans’ charities. In September, an Arizona judge sentenced her to more than 25 years in prison.

“We are thankful,” Allen said, “that this individual is going to be off the streets for many years and won’t be able to take advantage of anyone else.”

More than one million students around the country have completed the FBI's Safe Online Surfing (FBI-SOS) cyber education program since it was launched four years ago.