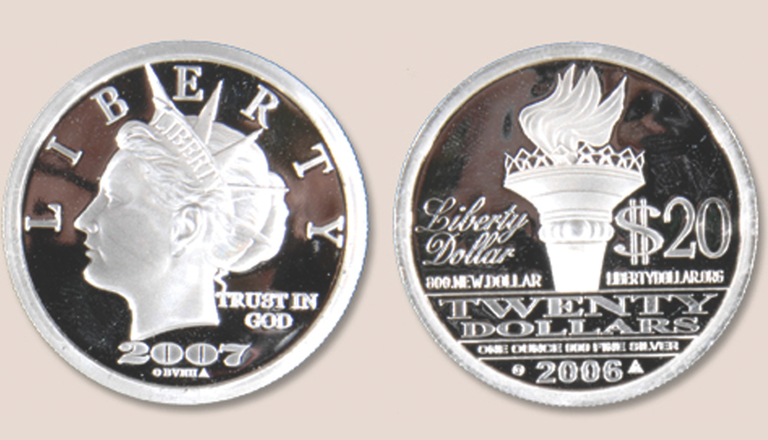 During the investigation, the U.S. Mint warned that Liberty Dollar coins were not legal tender.

Last month, the founder and “monetary architect” of an illegal currency known as the Liberty Dollar was convicted in North Carolina on federal charges of making illegal coins and selling them—at a profit—to compete with legal U.S. currency. Bernard von NotHaus, of Evansville, Indiana, was found guilty of making coins resembling U.S. coins; issuing, passing, selling, and possessing Liberty Dollar coins; issuing and passing Liberty Dollar coins intended for use as current money; and conspiring against the United States. Three others indicted in the case are awaiting their own trials.

“People understand that there is only one legal currency in the United States,” said Owen Harris, then-special agent in charge of our office in Charlotte. “When groups try to replace it with coins and bills that don’t hold the same value, it affects the economy. And consumers were using their hard-earned money to buy goods and services, then getting fake goods in return.”

It all began in 2004, when our Charlotte Division learned that a customer at a North Carolina financial institution had tried to use silver coins that were not legal U.S. currency. Our investigation revealed that the coins came from the National Organization for the Repeal of the Federal Reserve and Internal Revenue Codes (or NORFED), headquartered in Evansville, whose mission was to return the country’s monetary system to gold and silver. The president of the organization was Bernard von NotHaus, who marketed his currency as inflation-proof, claimed it was backed by silver and gold, and said it could be used to compete with—and limit reliance on—U.S. currency.

Our investigation, which included an undercover scenario, revealed that NORFED contracted for the minting of about $7 million worth of Liberty Dollars in Idaho. The organization also took orders and payments from customers for Liberty Dollars and organized “Liberty Dollar University” sessions to help educate people interested in selling, buying, or using the currency. There was even a Liberty Dollar website.

NORFED used several groups of people to get its illegal coins into circulation:

During the course of the investigation, the U.S. Mint issued a press release warning that the Liberty Dollar was not legal tender and that the Department of Justice had determined that the use of these coins as circulating money was a federal crime. This press release was sent to known NORFED regional currency officers. Despite the warning, though, NORFED and its officers, members, and associates continued to break the law and circulate the illegal tender.

Inside the role of intelligence analysts who brief the Director on threats to the U.S.

The Vault, our new electronic reading room, makes it easier to access and search FBI records.