Alleged Child Abuser Was on the Run for 23 Years 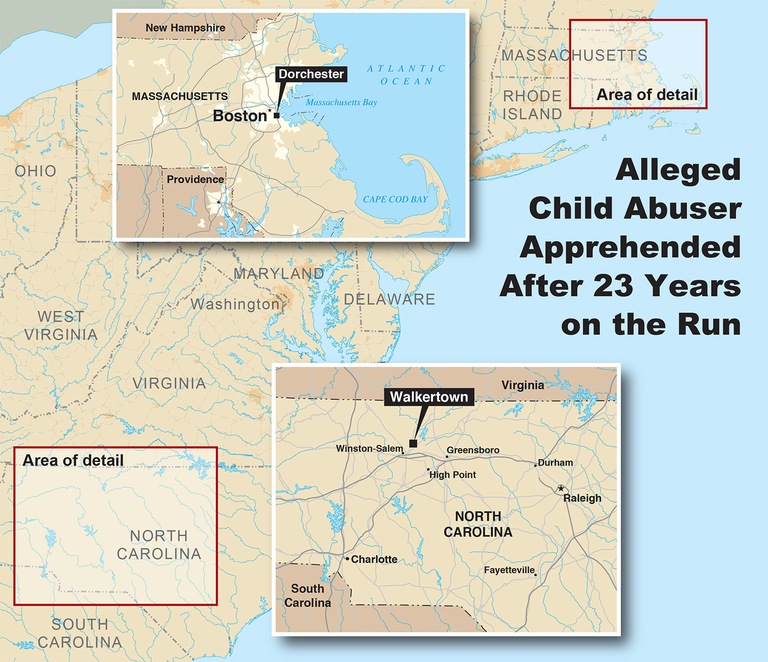 In 1993, Boston-area resident John Hartin was 23 years old when he befriended two young boys—ages 6 and 9—and allegedly raped them.

One of the victims eventually told a family member about the abuse, which led to an investigation and Hartin being charged in Massachusetts with five counts of rape of a child. Rather than face the charges, Hartin fled, and was later charged federally with unlawful flight to avoid prosecution.

He was at large for more than two decades, and investigators followed numerous leads without success. “But the case never stopped being actively investigated,” said Special Agent Brooks Broadus, a member of the FBI’s Boston Division Child Exploitation Task Force. “We were always looking.”

At the time of his disappearance, Hartin, a lifelong resident of Dorchester, Massachusetts, was working as a security guard. He had also studied graphics and computer arts in college. His first alleged victim was related to an acquaintance of Hartin’s. The young boy’s close friend was Hartin’s second alleged victim.

In 2012, the FBI launched a multi-state media campaign and announced a reward of up to $25,000 for information leading to Hartin’s arrest. The campaign generated thousands of tips—and many tantalizing leads—but no arrest.

More recently, explained Boston Police Department Det. Mike Sullivan, a member of the Child Exploitation Task Force, “we started looking at the case again with fresh eyes and went back to day one. We sought out Hartin’s family and friends and began to conduct new interviews.”

In the end, Sullivan said, “it was old-fashioned detective work that led to Hartin’s capture.” Sullivan reached out to various law enforcement agencies, including the U.S. Marshals Service and the U.S. Department of State, for assistance in the search. Through these partnerships, investigators learned that Hartin was using the alias Jay Carter. The fugitive had a driver’s license in Carter’s name and other fraudulent documents.

Leads were initially sent to the FBI Miami Division, FBI Long Beach Resident Agency, and the FBI Greensboro Resident Agency. The fugitive was traced to Walkertown, North Carolina, and the FBI put his residence under surveillance. Intelligence revealed that he had weapons in the house. “We had information that he was armed and potentially dangerous,” Sullivan said. Although Hartin was taken into custody without incident at his home on June 15, 2016, he initially denied his true identity.

“We are still piecing together where he was for all the years he was on the run,” Broadus said. “He lived in Florida for a long period of time before he went to North Carolina. We also had information he may have lived in California. He apparently did freelance computer work to earn money and worked in a bar in Miami.” Broadus added that Hartin had roommates and “significant others who might have helped him financially. They all deny they knew his real identity.”

Hartin, now 46 years old, was on the run for 23 years. He waived extradition, and U.S. Marshals recently returned him to Massachusetts, where he will now have to answer for his actions in court.

Broadus commended the Boston Police Department and federal law enforcement partners for their efforts on the case. After Hartin’s arrest, Sullivan and Suffolk County Assistant District Attorney Alissa Goldhaber contacted the victims to let them know Hartin had finally been captured. After learning the news, one victim said, “This is the best day of my life.”

“It was old-fashioned detective work that led to Hartin’s capture.”

The FBI launched a mobile version of its Bank Robbers website to make it easier for smartphone users to view photos and information about bank robberies.

The Future Agents in Training program provides a hands-on approach to educating high school juniors and seniors on FBI operations.