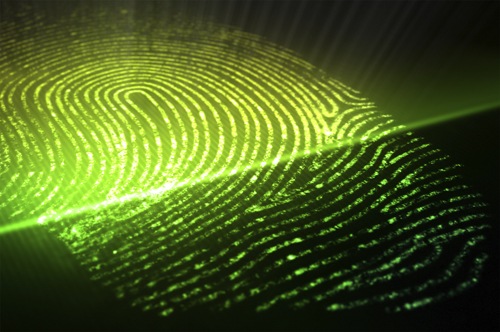 The 2015 recipient of the FBI’s Biometric Identification Award (formerly known as the Latent Hit of the Year Award) is a member of Virginia’s Norfolk Police Department (NPD) who played a key role in the identification of a dangerous serial offender. Congratulations to Melvin Grover III, an investigator with the forensic section of the NPD’s detective division.

This Criminal Justice Information Services (CJIS) Division award is traditionally given to a latent print examiner or law enforcement officer who solves a major violent crime using the FBI’s Integrated Automated Fingerprint Identification System, or IAFIS. But IAFIS—our longstanding fingerprint repository—was replaced last year by the Next Generation Identification (NGI) system, developed to expand the Bureau’s biometric identification capabilities and services, and future awards will involve the use of the NGI system.

The case Grover eventually became involved with started in August 2008, when the NPD received an emergency call from a private residence and responding officers found a female tied up in a locked bathroom. The victim, a U.S. Navy officer, said that she had been sleeping and was awakened by an unknown male brandishing a knife. The man raped her, bound her legs with the cord of an iron, and stole items from the home before fleeing.

Investigator Ward Stalker of the NPD processed evidence from the scene, including latent fingerprints from the iron and a door. Grover searched all the latent print evidence against Virginia’s Automated Fingerprint Identification System but got no results.

In September 2008, the victim and her daughter returned home one day and were confronted by the same attacker. He tied them both up with duct tape and raped the daughter before fleeing the scene. Once again, investigators collected evidence, including latent fingerprints and DNA. The prints were compared against Virginia’s system, which didn’t produce any known suspects but did confirm that the same individual committed both crimes. Investigators also searched the collected DNA evidence against the FBI’s Combined DNA Index System, or CODIS, with no results. The case remained unsolved.

In the spring of 2010, a female service member stationed in Kuwait was attacked while in a shower. An unknown male with a shirt covering his face went after the victim with a box cutter, but she fought back and the suspect ran off. Personnel from the U.S. Army Criminal Investigation Command collected blood samples from the shower and from a secondary crime scene where a blood-stained shirt was recovered from the trash. DNA isolated from the blood samples was searched against CODIS and positively linked to the two 2008 attacks in Norfolk. But the actual identity of the attacker remained unknown.

In January 2012, representatives from the Naval Criminal Investigative Service (NCIS) met with Investigator Grover of the NPD to discuss the cases, and latent fingerprint evidence from both crimes scenes was searched against the Bureau’s IAFIS, with negative results. Later on, NCIS contacted the CJIS Division’s Latent and Forensic Support Unit (LFSU) to coordinate investigative efforts with the NPD. LFSU personnel conducted an internal search of the latent fingerprints collected against the Bureau’s repository of civil prints—at that time, IAFIS—and forwarded possible candidates to Investigator Grover. Grover was able to determine that the prints matched those of Amin Garcia, who had served in a Navy reserve unit and whose time in duty stations in Norfolk and Kuwait coincided with the attacks.

NCIS was then able to obtain a sample of Garcia’s DNA, which matched the DNA evidence left at the Norfolk and Kuwait crime scenes. In January 2014, Garcia was arrested in New York City and extradited to Virginia.

Garcia was convicted after a three-day trial for his crimes in Norfolk, and in December 2014, he was sentenced to life in prison plus 120 years. For the Kuwait attack, he was indicted in October 2014 by a federal grand jury, and that case is still pending.

Thanks to the skills and dedication of a Norfolk Police Department investigator—and technology—a violent predator was identified and taken off the streets.

Protect Your Wallet and Your Information This Holiday Season

Be aware of the increasingly aggressive techniques of cyber criminals who want to steal your money and your personal information.