The FBI and the Royal Canadian Mounted Police

Marking a Century of Partnership 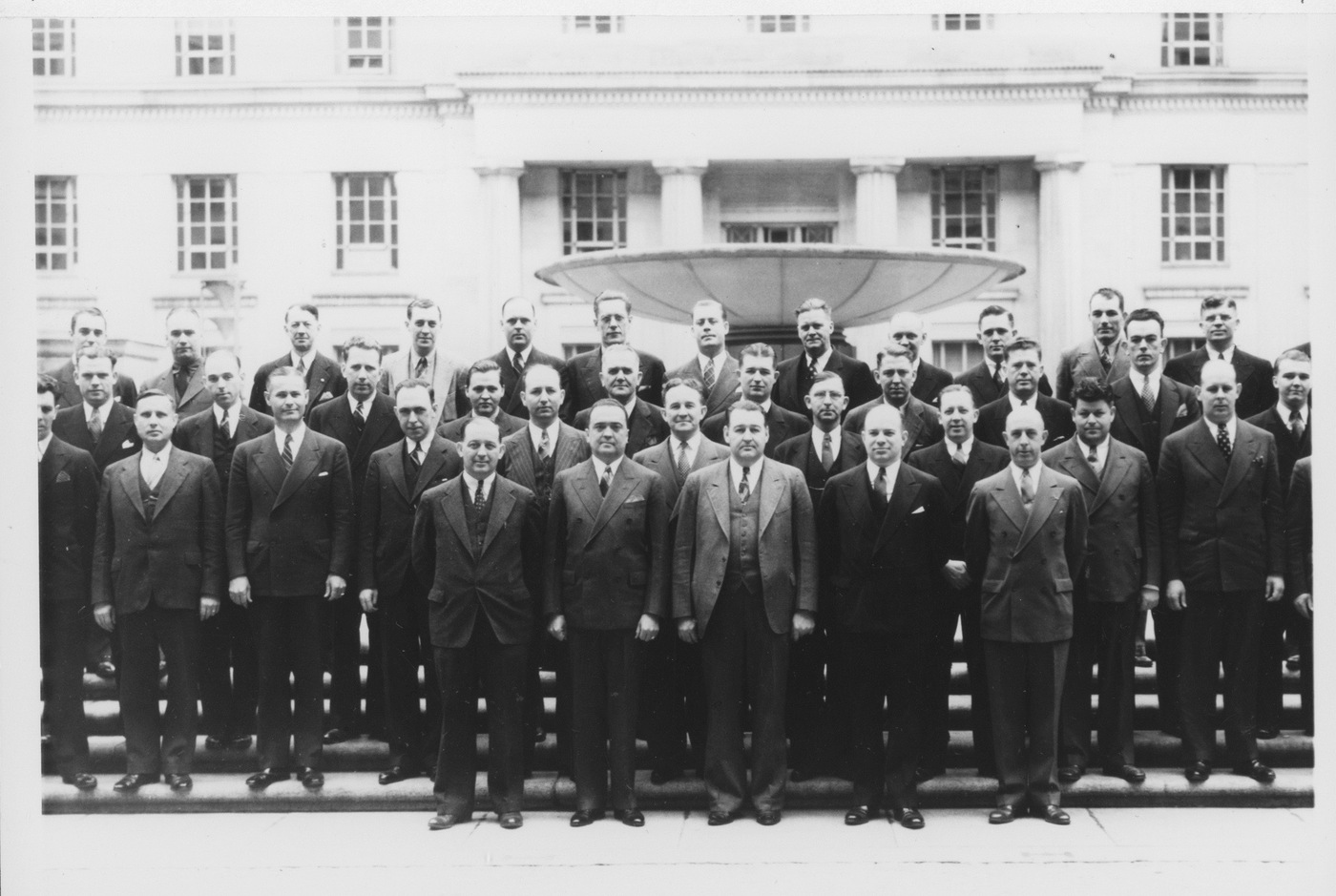 The FBI’s seventh National Academy class, seen in this April 1938 photo, was the first to include an international partner—RCMP Sergeant Ed Wood. The National Academy is a prestigious educational training program for law enforcement leaders from around the world.

Earlier this summer, the Canadian Embassy in Washington, D.C., hosted an exhibit called Between Friends, Entre Amis: A Snapshot of Canada-U.S. Relations, which celebrated the 150-year partnership between our nations.

It also highlighted another milestone: a century of collaboration between the Royal Canadian Mounted Police (RCMP) and the FBI.

Canada’s federal law enforcement agency traces its origins to 1873. In that year, Canada created a central police force to patrol Canada’s new western territories. That force later became the North-West Mounted Police, then the RCMP in 1920.

Our respective organizations began working together soon after the Bureau’s launch in 1908. But the relationship took a major step forward 100 years ago this fall.

At the time, both nations were experiencing domestic unrest, including violent radicalism, brought on by the end of World War I and the birth of the Soviet Union.

It was clear that national security threats were becoming cross-border issues. Regular diplomatic channels were too slow to handle fast-moving law enforcement situations.

His mission was to initiate a funnel of information sharing and act as an on-site liaison with U.S. agencies, including the Bureau of Investigation, as the FBI was then known.

Thrust into national security matters soon after its formation, the Bureau welcomed the chance to work with the highly-respected “Mounties” and other RCMP professionals.

Within weeks, the Bureau opened communications channels with our neighbor to the north.

The FBI—and the nation—are grateful to the RCMP for its longstanding partnership and look forward to working together for many more years to come.

The relationship soon began paying dividends. By the mid-1920s, the Bureau and RCMP were exchanging criminal identification information and tracking cross-border fugitives.

That led to many successes. In 1933, for example, a train robber named Frank Grigware—who had broken out of a U.S. prison two decades earlier—was arrested in Canada for poaching. Grigware might have gone unnoticed if not for an astute RCMP clerk who matched his fingerprints with those provided by the Bureau years before. It was a clear demonstration of the power of international information sharing.

In 1935, the FBI began the National Academy, a comprehensive training program for police executives. Just three years later, RCMP Sergeant Ed Wood became its first international graduate. He has been followed by many Canadian law enforcement officers and thousands of other international partners.

World War II brought even closer interaction. In May 1942, the Bureau opened a legal attaché in Ottawa, one of its first international liaison posts. It quickly became a vital link in sharing intelligence during and after the conflict.

In the early days of the Cold War, this cooperation was crucial in dealing with the stunning revelations of Igor Gouzenko. A code clerk in the Soviet Embassy in Ottawa, Gouzenko defected right after the end of World War II with the help of the RCMP. He provided a trove of documents about Soviet spying in North America. These disclosures sparked massive investigations and opened the eyes of both countries to Soviet espionage threat.

For a number of years, the Bureau and RCMP housed an official representative in each other’s headquarters. In 1957, these representatives were moved into our corresponding embassies, but the closeness of the relationship remained and led to many operational successes.

Among the most significant was the hunt for James Earl Ray. After assassinating Dr. Martin Luther King, Jr. in 1968, Ray fled to Canada. The RCMP helped the FBI track his movements and unravel his various false identities. Ray was ultimately captured in London, when an airport ticket agent recognized his fake name from an RCMP watchlist.

As an age of international crime dawned in the late 20th century, the FBI and RCMP became closer than ever. The organizations worked joint cases involving drug trafficking, organized crime, telemarketing fraud, and more. They also joined hands to help protect multiple Olympic games in both nations.

Most importantly, the FBI and RCMP began extensive cooperation in investigating and preventing terrorism attacks.

In December 1999, for example, Ahmed Ressam was stopped at the Canadian border as he attempted to enter the U.S. His car was loaded with bomb-making materials. In the ensuing case, investigators and forensic experts from the RCMP and FBI clearly linked Ressam to a plot to bomb Los Angeles International Airport on the eve of the millennium celebrations. Ressam was convicted and sentenced to 37 years in prison.

For both organizations, the past century has proven the power and necessity of international law enforcement cooperation. The FBI—and the nation—are grateful to the RCMP for its longstanding partnership and look forward to working together for many more years to come.

The anniversary of the first African-American FBI agent provided an opportunity for current and former African-American special agents to reflect on how far the Bureau has come in the past century—and where it still needs to go.

A hacktivist who overwhelmed the websites of a city and its police department with DDoS attacks has been convicted and sentenced to prison.