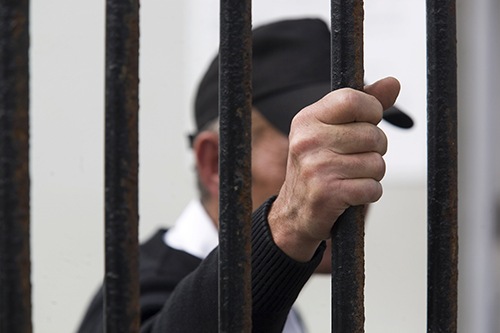 The FBI’s Atlanta Division today announced the results of an investigation into widespread public corruption within the Georgia prison system that uncovered extensive crimes carried out by inmates with the help of corrupt guards—crimes whose impact was felt well beyond prison walls.

Nearly 50 former and current Georgia Department of Corrections officers were indicted today for accepting bribes in exchange for protecting what they believed to be drug shipments. Last month, 15 corrections officers, 19 civilians, and 19 inmates were also indicted, and a large amount of contraband—including drugs, weapons, and, in particular, cell phones—was recovered.

FBI Atlanta Special Agent in Charge J. Britt Johnson called the two-year investigation, dubbed Operation Ghost Guard, “unprecedented” in scope. “While the vast majority of those working within Georgia’s correctional facilities are dedicated and loyal officers and employees,” Johnson said, “criminal and corrupt activities were found in 11 of the 35 state corrections facilities. Central to those illegal activities inside the prisons was the unbridled use of cell phones.” 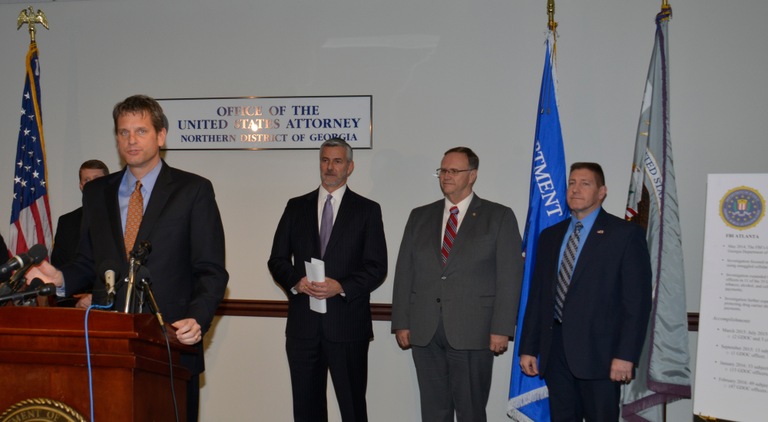 U.S. Attorney for the Northern District of Georgia John Horn speaks at a press conference announcing the results of Operation Ghost Guard on February 11, 2016. He was joined by FBI Atlanta Special Agent in Charge J. Britt Johnson, Georgia Department of Corrections Commissioner Homer Bryson, and FBI Atlanta Assistant Special Agent in Charge Doug Korneski (left to right), among other officials.

Today’s indictments focused on correctional officers who were willing to sell their badges—to use their law enforcement credentials to protect what they believed to be drug deals involving large shipments of methamphetamine and cocaine. In a series of FBI undercover operations, more than 45 officers agreed to protect the supposed drug deals in exchange for thousands of dollars in bribes. During the undercover deals, the officers often wore their official uniforms or displayed their badges to avoid law enforcement scrutiny.

Operation Ghost Guard, undertaken in collaboration with the Georgia Department of Corrections, revealed that corrupt guards typically earned $500 to $1,000 for smuggling a single cell phone to a prisoner. Between 2014 and 2015, more than 23,500 contraband phones were seized throughout Georgia prisons—which house 50,000 inmates—and those phones were used for a variety of crimes that put prison security and public safety at risk.

The illicit money raised through so-called “jury scams” and other frauds (see sidebar) was often used to bribe prison guards. “This was a massive investigation,” Odom said. “We identified and indicted approximately 130 subjects.” He added, “The FBI could never have worked this case without the assistance of the Department of Corrections. They recognized they had a problem, and they wanted to fix it.”

Operation Ghost Guard began in May 2014, shortly after a kidnapping that was set in motion by a prisoner with a contraband phone. The prisoner, serving a life sentence in North Carolina, wanted revenge on the prosecutor who helped put him there.

Using that contraband phone, the prisoner enlisted the help of fellow gang members in Atlanta who were not incarcerated to kidnap the prosecutor’s father in North Carolina and drive him to Atlanta, where he was to be tortured and killed. The FBI’s Hostage Rescue Team was able to rescue the man before gang members killed him, “but the risk of life to this individual was very real,” Johnson said. “All because of a cell phone in a prison.”

That incident served as a catalyst for Operation Ghost Guard. It also prompted the FBI’s Public Corruption Unit in Washington, D.C., to launch the nationwide Prison Corruption Initiative.

“Because of one small act of corruption—a guard giving a cell phone to an inmate—many serious crimes can occur,” said Special Agent Joe Gonzalez, who heads the Bureau’s Public Corruption Unit at FBI Headquarters. “This is not just Georgia’s problem, it’s a national problem.”

Gonzalez said that since the Prison Corruption Initiative was launched in June 2014, the number of FBI public corruption cases in prisons nationwide has tripled. “Corrections officers might not be elected officials,” he added, “but they are public officials sworn to protect the community, and we are going to hold them to that standard.”

Georgia inmates with contraband phones and their accomplices outside of prison raised tens of thousands of dollars using various fraud schemes. Here’s how the “jury scam” worked: