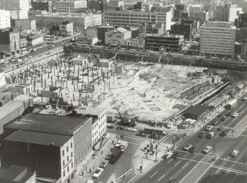 From its inception in 1908 until 1975, the main offices of the FBI were housed in the Department of Justice building. The first request for a separate FBI building occurred in 1939. Although the Public Buildings Agency initiated plans for an FBI building in 1941, America’s entry into World War II required postponing all government building projects. The next serious request to Congress for a separate building was not made until 1961.

Congress approved a separate FBI building in April 1962. The General Services Administration (GSA), which handles public building construction, allocated $12,265,000 for architectural and engineering design. At that time, the total estimated cost was $60 million. GSA selected Charles F. Murphy and Associates of Chicago, Illinois as architects, and Berswenger, Hoch, Arnold and Associates of Akron, Ohio for engineering. The National Capital Planning Commission approved the site; the building design required approval from the National Capital Planning Commission, GSA, the Commission on Fine Arts, and the Pennsylvania Avenue Advisory Council. Although all conferences between GSA and the architects were open to Bureau representatives and GSA sought FBI opinion, neither the FBI nor the Department of Justice had to approve the exterior design. The Bureau, however, allocated the interior space.

On January 2, 1963, GSA announced the approval of the site for the FBI building bounded by Pennsylvania Avenue and E Street and Ninth and Tenth Streets, Northwest. GSA purchased the land at a of cost $41.17 per square foot. The original design prepared in 1963 by Charles F. Murphy and Associates was a traditional box-like structure. It incorporated the Bureau’s request for a central core of files surrounded by offices. 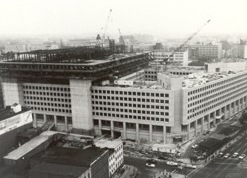 The final FBI building design incorporated many features of the 1964 Pennsylvania Avenue proposal, with modifications primarily governed by security considerations. The building has an open mezzanine and courtyard, but access to the courtyard is limited, and most of the first floor is closed to facilitate security. Recessed panels along the ground floor were spaced to give the illusion of two-story columns, thus producing an arcade-like facade. Also for security reasons, no stores were included on the first floor. The main part of the building, facing E Street, retained the idea of a central core of files.

On October 7, 1964, the National Capital Planning Commission approved the major design concept with its security modifications. The approved plan consisted of 2,800,876 square feet of space for 7,090 employees. Height limits of 107 feet (seven stories) along Pennsylvania Avenue and 160 feet (eleven stories) along E Street conformed to the Pennsylvania Avenue Advisory Council and District of Columbia requirements.

For reasons of economy, the approving agencies insisted upon poured concrete as the major outside building material. The concrete used for the FBI building contained an aggregate of crushed dolomite limestone, a unique composition. While contrasting with the traditional marble, granite, or limestone government buildings, it echoed a major architectural style of the 1960s. The concrete was poured into reusable steel forms separated by metal ties. The ties remained in the concrete when the molds were removed. This technique produced an architectural feature of evenly spaced holes throughout the exterior. 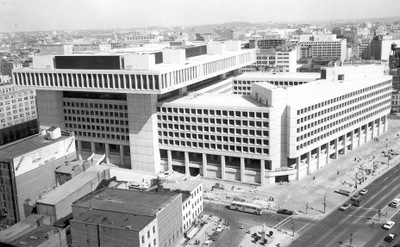 GSA decided to use a phased construction process in order to commence the project after delays caused by the removal of GSA building appropriations from the federal budget and numerous design changes. Phase I consisted of clearing the site and building the foundation. On November 9, 1967, the Bureau of the Budget authorized GSA to award construction for the first phase to Norair Construction Company. Construction started December 6, 1967. Blake Construction Company received the contract for Phase II, the construction of the remainder of the building, on November 11, 1971. The need for supplemental appropriations, further design changes, and strikes by construction workers caused further delays. Inflation caused construction costs to rise daily. When completed, the building cost $126,108,000—$106,000,000 more than the 1939 proposal.

The first FBI employees moved into the new building June 28, 1974. At that time, FBI Headquarters offices were housed in nine separate locations. By May 30, 1975, the Director, the associate director, and several divisions had moved in. Thirty-eight years after the first proposal for a separate FBI building and 15 years after Congress approved construction on the Pennsylvania Avenue site, the last employees moved into the building in June 1977.