In 1972, a man hijacked an United Airlines flight and parachuted from the plane over Utah with ransom money.

Here’s how the FBI tracked him down.

Certain names in the following description are fictitious names to protect peoples’ identities.

Fourteen year-old Peter Fanning (fictitious name) of Provo, Utah, made a surprising discovery. Lying in front of him, beside a steel culvert, was what he thought might be a parachute pack. He brought the strange object to his father who was replacing a flat tire on the family car a short distance away. The father notified the local sheriff of their find after returning home that afternoon.

It was soon learned that the Fannings had stumbled upon one of the four parachutes furnished to a lone gunman who had commandeered a passenger plane on April 7, 1972, in the Colorado skies.

United Airlines Flight 855, a Boeing 727 en route from Newark, New Jersey, to Los Angeles, California, with 85 passengers and a crew of six, had resumed flight after a Denver, Colorado, stopover.

Approximately 20 minutes after takeoff, at 5:18 p.m., a male passenger was observed in his seat holding a hand grenade.

A stewardess, notified of the situation, immediately advised the captain. An off-duty pilot known to be on board as a passenger was requested to discreetly walk around and assess the situation only to have the person in question draw a pistol as he approached. The gunman handed over a sealed envelope, labeled “hijack instructions,” and stated, “give this envelope to the girl and have her take it to the captain.” A stewardess complied, and the off-duty pilot returned to his seat.

The stream of events had transpired so quickly that most passengers were unaware of the threat. Captain William Olinsky (fictitious name) discussed the matter with some crew members and decided to land at nearby Grand Junction, Colorado, where he would radio for law enforcement assistance on the ground. Olinsky then announced over the public address system that the aircraft was experiencing a “minor mechanical problem” and would land shortly.

The envelope with the hijack instructions was then opened by the captain. Inside were two typed pages of highly detailed directions, a hand grenade pin, and a bullet. The “instructions” required Olinsky to land at San Francisco International Airport, and park at “Runway 19 left.” There, he was to follow certain procedures which designated the number of persons allowed near the plane at one time, and the distance from the aircraft that all vehicles other than those containing fuel were to be kept. In addition, the hijacker demanded $500,000 in cash, four parachutes, and the return of all written or typed directions given during the course of the flight.

The crew decided to comply and notified San Francisco of the hijacking and intended landing. A flight crew member announced to the passengers that the Grand Junction airport could not handle the “necessary repairs” after all, and it would be necessary to divert to San Francisco. From this point on, normal operations continued on-board.

In consideration of the safety of all aboard Flight 855, United Air Lines officials decided to meet the demands upon the plane’s landing at San Francisco. Two flight bags loaded with cash and four parachutes were delivered to the plane.

The hijacker, who had assumed command on touchdown, gave up his baggage check and had his luggage brought aboard. Fuel trucks hurriedly filled the plane’s tanks with thousands of gallons of jet fuel. After seeing the completion of his written directions, some three hours after the plane had parked, the gunman released the passengers and one of the stewardesses. He then ordered the rest of the crew into the cockpit and took a position in the rear of the aircraft.

The hijacker then used the intercom to summon a stewardess. He gave her another set of flight instructions, telling the pilot to take off towards the east, climb to 16,000 feet, and fly precisely at 200 mph on a course that would overpass several specific Utah communities. The messages, now hand-printed, between hijacker and pilot were sent with increasing frequency, always using the stewardess as a courier. The cabin was ordered depressurized, and the gunman warned that if any pursuit planes were spotted he would detonate a hidden explosive device after he had jumped, before the plane could be landed.

The hijacker opened his luggage and covered the peephole between the cockpit and cabin. Observed by Second Officer Floyd Smith (fictitious name) through a slight space under the cockpit door, the hijacker quickly put on a jumpsuit, helmet, and parachute. Once he had shut off the cabin lights to better view the ground, the gunman demanded to be kept abreast of wind, ground, and air speeds; altimeter settings; and sky conditions.

After the aircraft passed over the last Utah community on his prescribed course, the hijacker sent no more notes. Hoping the incident was over, a stewardess ventured into the passenger area and determined that the gunman had indeed bailed out with the ransom into Utah’s darkened skies. Five hours after the hijacking began, the weary crew headed for nearby Salt Lake City International Airport.

The FBI immediately searched the plane’s interior for evidence upon its landing. Any object the hijacker may have touched was examined. An array of material such as seat belts, gum wrappers, cigarette butts, and a copy of United’s passenger publication, “Mainliner Magazine,” was gathered by agents. One hand-printed note the hijacker neglected to take with him was also sent to the FBI Laboratory in Washington, D.C., for closer scrutiny.

Interviews with crew members and passengers traced the hijacker’s steps from the moment he boarded. One stewardess recalled the subject was flashily dressed. Other passengers and crew remembered a passenger agent had entered the plane after all had boarded at Denver to locate the owner of an envelope left in the waiting room. The subject claimed it, went into the lavatory for an extended period, and finally was told by a flight officer to return to his seat for takeoff. The general consensus was that the individual had donned a wig and moustache while in the lavatory. However, several passengers felt that more than one person was involved. The notes received by the crew generally used a terminology of “we this” or “we that,” thus giving this impression.

A search of the countryside in the vicinity of the Provo, Utah Airport was conducted since evidence indicated that the hijacker had bailed out in the area.

At approximately 2:00 a.m. the next day, FBI agents, Provo City Police, and the Utah County Sheriff’s posse lined up some 20 to 30 yards apart and combed the surrounding fields.

The night dragged on with no new leads being developed. Within a few hours, though, area residents woke up to news of the hijacking. The Salt Lake City Office of the FBI received a telephone call before noon from a concerned citizen who said an acquaintance had outlined a “foolproof” plan for hijacking an airplane.

The acquaintance, Richard Floyd McCoy, Jr., was a Vietnam veteran, a helicopter pilot, and an avid and capable skydiver. McCoy, 29, was reportedly a member of the Utah Air National Guard and a Police Science Major at Brigham Young University. In addition, McCoy was generally known to be having serious financial problems.

The Department of the Army was requested to furnish samples of McCoy’s handwriting from its records to the FBI Laboratory since the citizen, in a more detailed personal interview, provided additional valuable information. 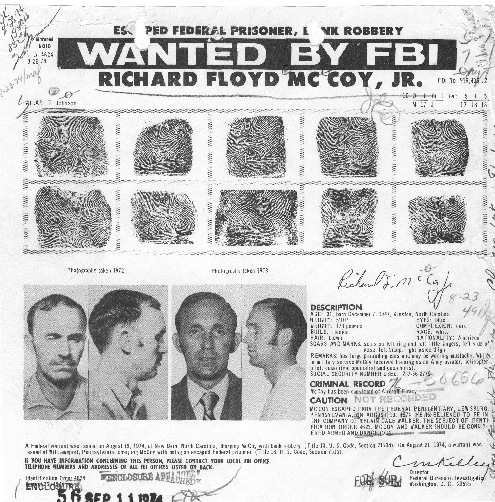 The identification order for Richard Floyd McCoy, Jr., who hijacked a United Airlines flight and parachuted from the plane over Utah with ransom money in 1972.

McCoy was located and interviewed by FBI agents but denied any participation in, or prior knowledge of, the hijacking. He freely gave the agents a sample of his hand printing to be compared later with the style in the note the hijacker left behind. McCoy continued to claim innocence and was not detained.

Meanwhile, the FBI Laboratory had been busy with evidence already received. A handwriting expert compared the note found on the plane with McCoy’s writing on military service records and determined that McCoy had written the note. Fingerprint specialists discovered that a latent print on the “Mainliner Magazine” found in the seat next to the hijackers’s matched a print taken from McCoy during his service year.

Incriminating evidence mounted against McCoy. In trying to trace the steps the hijacker took after parachuting into the rural area surrounding Provo, a lead was developed. When shown McCoy’s photograph an employee at a roadside hamburger stand said she had sold him a milkshake at about 11:30 on the night of the crime. In addition, a teenager stated that a man fitting McCoy’s description paid him five dollars for a ride from the stand to a nearby town.

On April 9, a federal complaint was filed charging McCoy with aircraft piracy and interfering with flight crew members.

Later the same day an arrest warrant was obtained and McCoy was taken into custody by FBI agents at his Provo home. Agents examined the accused’s home under a search warrant and uncovered various articles of skydiving equipment, an electric typewriter (with key impressions matching those on the typed hijacking instructions), and $499,970 in U.S. currency. A federal grand jury in Salt Lake City indicted McCoy on April 14.

Two months later, McCoy, found to have acted alone, was tried in the U.S. District Court and found guilty despite his claim of innocence. He was subsequently sentenced to a term of 45 years.

McCoy appealed the decision to the U.S. Supreme Court, which denied his petition on October 9, 1973.