In the 1970s, the FBI used a double agent to root out Soviet spies and learn their tradecraft. 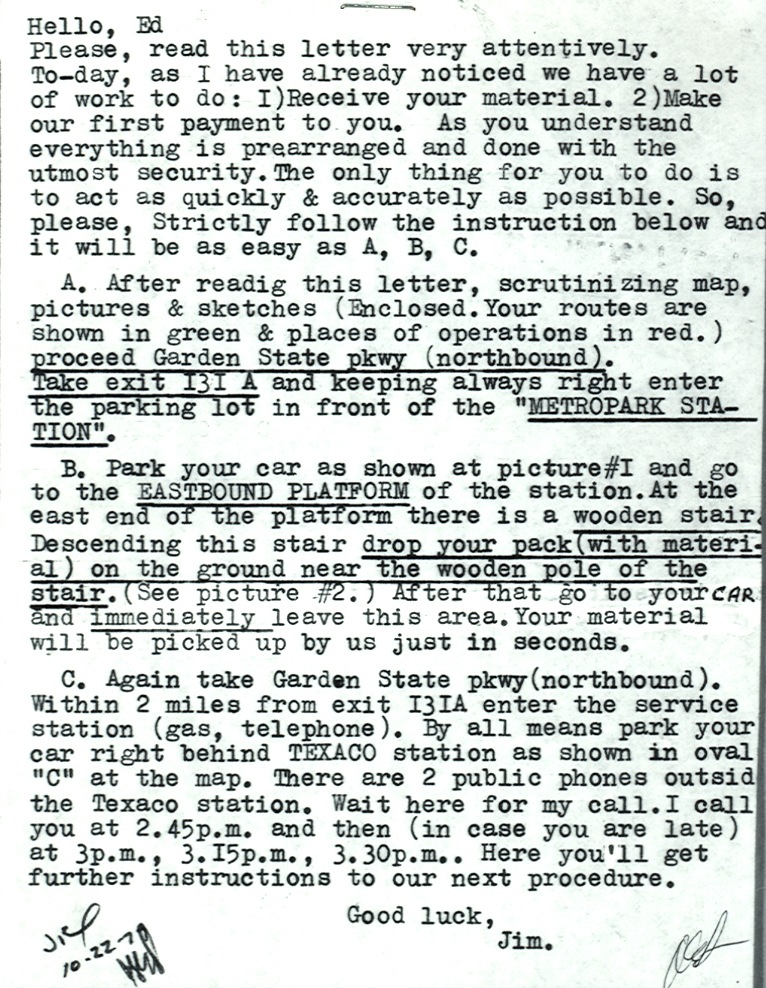 A letter sent by the Soviets to an FBI double agent named Art Lindberg in October 1977.

“Hello, Ed,” the note began. “Please, read this letter very attentively. To-day, as I have already noticed we have a lot of work to do: 1) Receive your material. 2) Make our first payment to you.”

“Ed” was actually Art Lindberg—a lieutenant commander in the Navy and a double agent recruited by the Naval Investigative Service and the FBI in the spring of 1977. At the time, we suspected the Soviets were using their U.N. office as a front for espionage—specifically, to spy on U.S. Navy operations in New York and New Jersey. Lindberg’s modest income, impending retirement, and information access made him a perfect candidate to fool the Soviets into believing he would sell secrets for cash.

It worked. The letter was one of many communications sent by the Soviets to Lindberg, often in stilted English, after they took the bait in August 1977 until the following spring when we arrested two Soviet officials.

At the outset, FBI Headquarters dubbed the spy case “Operation Lemon-Aid.” The name had no meaning, but as the case developed, it seemed to fit more and more.

Why? Because as we tracked the steady stream of phone calls and letters between Lindberg and the Soviets, we learned quite a bit about Soviet spy craft in the ‘70s. The Soviets repeatedly passed messages and money to Lindberg in the most ordinary, everyday items: magnetic key holders placed in phone booths, cigarette packs, soda cans, orange juice cartons, even a rubber hose from an appliance. Most of the pre-arranged “dead drop” sites where the secrets were supposed to be passed (it was actually declassified information) were along the busy New Jersey Turnpike.

We moved in on May 20, 1978 when we felt we had enough information to make the arrests.

We decided to set a trap—we gave Lindberg five canisters with actual classified materials so the Soviets would be caught red-handed. Hiding inside the trunk of Lindberg’s car were two FBI agents, with many other agents waiting at the drop site on a back road. Lindberg approached the site, stopped the car, and picked up a can labeled “Ann Page Bartlett Pears,” as instructed by the Soviets. He grabbed the can, dropped off the canisters, and drove off. Soon after, we arrested two covert KGB officers—Valdik Enger and Rudolf Chernyayev. A third Soviet at the scene, Vladimir Zinyakin, had diplomatic immunity and was later expelled from the country.

In the end, it was one of our most important counter-espionage cases of the decade. Enger and Chernyayev were the first Soviet officials to ever stand trial for espionage in the U.S. Both were convicted and ultimately exchanged for five Soviet dissidents.

The cat-and-mouse game between FBI and KGB agents would continue, but “Operation Lemon-Aid” gave us insights that helped our operations for years to come.