In 1959, the theft of a valuable diamond ring led the FBI on a chase across the country.

Here’s how we recovered the ring and caught the culprits. 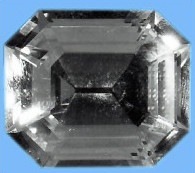 As diamond rings go, it was massive: the center blue-white stone weighed more than 33 carats and was roughly the size of a small marble. And it was surrounded by two smaller baguette-shaped diamonds on either side.

Who owned it? An attractive woman named Vera Krupp, a German actress and American baroness of sorts who’d come into a ton of money when she married—and later divorced—a wealthy German industrialist. Krupp loved the ring and wore it everywhere—always snug on her finger. Who could blame her?

All that changed the evening of April 10, 1959, on Krupp's sprawling Spring Mountain Ranch about 26 miles southwest of Las Vegas.

She and her foreman were finishing dinner when three men knocked on the door offering to blacktop her long driveway. Within seconds they’d forced their way in, ripped the ring off Krupp’s finger (to the point of drawing blood) and tied the pair blindfolded back-to-back with wire from a lamp.

The robbers had done their homework. They rifled the ranch house like they knew it well—stealing along with the ring about $700,000 in cash, a revolver, and a camera.

Krupp and her foreman eventually got free, but because the battery-powered ranch phone was dead, they had to drive to the Las Vegas airport to call authorities. The FBI quickly got involved, under the assumption (which later proved correct) that the stolen diamond would be transported across state lines. 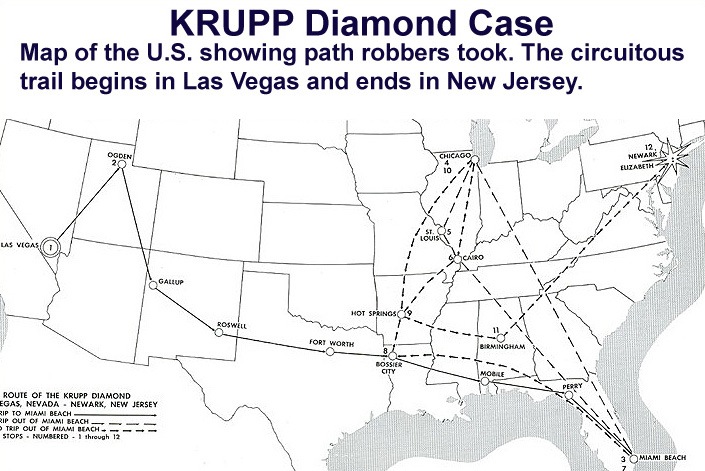 The FBI’s attention was soon directed to John William Hagenson, a fugitive wanted in connection with a similar robbery in California. 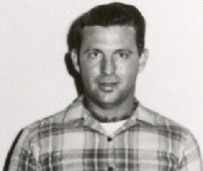 Drawing on nearly a dozen field offices, we tracked Hagenson’s zigzag moves across the country and eventually arrested him in Louisiana.

We soon added other suspects to our list and were able to piece together the movements of the thieves from city to city—follow their trial across the map above. At the same time, all field offices had their ears to ground to see if the large stone would end up for sale.

And it did, about six weeks later. An agent in Newark, New Jersey, heard a rumor from a criminal informant that a local grocer was asking around, trying to sell a big diamond.

Bureau agents quickly located this man, and he led us to one of the three thieves, James Reves (pictured). Agents searched his hotel room in Elizabeth and found the center diamond in the lining of his coat hanging in the closet. The two baguette diamonds were recovered from a jeweler in St. Louis during the course of the investigation.

Hagenson, Reves, and several other accomplices were brought to trial in November 1959.

On November 20, Reves and two others were found guilty. A few weeks later Hagenson and the other suspects were convicted as well. Hagenson—the alleged mastermind—later beat the rap on appeal.

With all diamonds recovered, Mrs. Krupp was able to rebuild her ring. In 1968 after her death, it was bought at the then record auction price of $307,000 by Richard Burton for his wife Elizabeth Taylor. The ring was later sold after Taylor’s death.

Read about the history of Spring Mountain Ranch, now a Nevada state park, owned by Vera Krupp from 1955 until 1967, on the Nevada State Parks website.