On March 13, 1942, Special Agent Hubert J. Treacy, Jr. was gunned down by a pair of army deserters in an Abingdon, Virginia restaurant.

Another agent was seriously wounded.

On that date, Lovett, 21, and Testerman, 22, who were assigned to a Machine Gun Troop, Third Cavalry, Fort Oglethorpe, Georgia, decided to desert from the U.S. Army. Shortly after midnight on March 12, 1942, in accordance with their carefully arranged plans, Lovett and Testerman entered the room of Sergeant Clifton H. Hall, who was in charge of quarters, and bludgeoned him into unconsciousness with an iron bell on the mess hall porch. They then stole four .45 caliber U.S. Army Smith and Wesson revolvers and approximately 100 rounds of ammunition from an adjoining room.

The men escaped from the military reservation and reached a nearby highway. Testerman and Lovett then commandeered a taxi cab and forced the driver at gun point to take them from Fort Oglethorpe, Georgia to a site near Cleveland, Tennessee. At that location, the taxi driver was forced from the cab, searched, and robbed of $23, the fleeing deserters continuing on with the automobile. The fugitives proceeded to Sweetwater, Tennessee, where they abandoned the cab. Then they traveled by bus to Abingdon, Virginia, where they arrived late in the afternoon and spent the night at an inn. En route, however, they stopped at Knoxville, Tennessee, and purchased a handbag in which they could carry the firearms and ammunition without attracting attention.

In the meantime, a vigorous investigation was being conducted by the FBI. The Knoxville Field Office was notified of the activities of these soldiers on the morning of March 12, 1942, and agents were dispatched from several eastern and southern field offices to apprehend the deserters, prosecution against them having been authorized and warrants for their arrests issued in connection with violations of the National Motor Vehicle Theft Act and the kidnapping statutes. Investigation developed that Testerman had a girl at Abingdon, Virginia, and the Richmond Field Office of the FBI was promptly furnished this information. 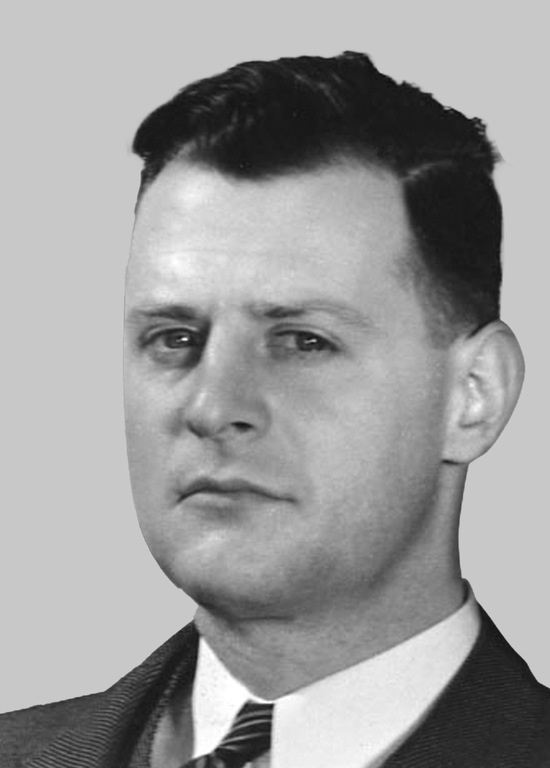 At 9:35 a.m., on March 13, 1942, Special Agent Hubert J. Treacy, Jr., and Charles L. Tignor, to whom this particular phase of the investigation was assigned, were driving into Abingdon, Virginia, when Agent Treacy observed two soldiers walking along the street. They resembled the descriptions of Lovett and Testerman. The agents parked their car and walked into a cafe which the soldiers had entered a few moments before.

The suspects were sitting in a booth, and had given their orders for breakfast. Agents Treacy and Tignor approached the booth, identified themselves as agents of the FBI, explained they were looking for two deserters and asked the soldiers their identities.

Lovett, without warning, suddenly produced a .45 caliber revolver from his belt, and fired at Special Agent Tignor, who was knocked to the floor and wounded in the right arm. In the same motion, Lovett turned the gun on Special Agent Treacy as he was drawing his revolver. Lovett shot him in the face, and the impact knocked Agent Treacy to the floor. Lovett turned and fired several more shots at Agent Tignor, who was attempting to draw his revolver with his left hand. Before leaving the cafe, Lovett fired again at Agent Treacy, who was lying face down on the floor. Testerman had risen from his seat in the booth, and as he left the cafe he fired a shot at Agent Treacy. Agent Tignor rose from the floor of the cafe and attempted to pursue the murderers, but collapsed after reaching the street due to his injuries.

Both agents were taken to an Abingdon hospital immediately. Special Agent Hubert J. Treacy, Jr., was pronounced dead upon arrival at the hospital; a bullet entering his back caused his death. Agent Charles L. Tignor was seriously wounded and was confined to his hospital bed for several weeks as the result of receiving gun shot wounds in the chest, right arm, and left hand.

After running from the cafe, Lovett and Testerman unsuccessfully attempted to commandeer an automobile. They did, however, secure a second car belonging to a local citizen. As they approached a street intersection in Abingdon, a member of the local police department drove his car across the intersection to prevent their escape and a furious gun battle ensued. They fled from the scene of this encounter and took refuge in a basement of a house located on the outskirts of that town. While fleeing from the murder scene, they also shot at four women who were riding in a car in Abingdon.

The house in which the fugitives barricaded themselves was soon surrounded by a posse of law enforcement officers, including FBI agents, local officers, and numerous other officers from surrounding communities who had been attending an FBI Civilian Defense School at Bristol, Virginia. Many shots were exchanged in the ensuing gun battle with the fugitives. Testerman and Lovett, before their capture with the aid of tear gas, threatened and cursed the officers in loud voices on numerous occasions. After a sufficient amount of tear gas had entered the basement, however, the two fugitives threw down their guns and walked out with their hands in the air.

A federal grand jury at Harrisonburg, Virginia, returned a true bill of indictment on March 19, 1942, charging Testerman and Lovett with the murder of Special Agent Treacy in violation of Sections 253 and 452, Title 18, U.S. Code, Annotated. The trial of the case began in the U.S. District Court at Abingdon, Virginia, on April 15, 1942.

On April 17, 1942, the deserters were found guilty of murder in the first degree following a jury trial. Upon the recommendation of the jury that capital punishment not be imposed, a U.S. District Judge at Abingdon, Virginia, sentenced both individuals  to life imprisonment.

In addition to that prosecutive action, on April 28, 1942, a federal grand jury at Chattanooga, Tennessee, returned indictments charging Lovett and Testerman with violating the kidnapping statutes, as well as the National Motor Vehicle Theft Act. Also, on May 18, 1942, at Rome, Georgia, a federal grand jury indicted these felons in connection with three other violations. The latter indictments were stricken from the docket with leave to reinstate, while certified copies of the former were filed as detainers against the possible release of Lovett and Testerman. Inasmuch as Lovett and Testerman, although sentenced to life imprisonment, would become eligible for parole at the expiration of 15 years, it was decided to try them on the federal indictments returned at Rome, Georgia, May 18, 1942.

Immediate trial was prevented because of the overseas service of many material witnesses. On November 19, 1946, therefore, a federal judge at Rome accepted their pleas of guilty to the three indictments charging: 1) Assault on a Government Reservation; 2) Robbery of Personal Property, U.S. Government; and 3) Interstate Transportation of Stolen Government Firearms. The judge imposed a 10-year sentence on the first indictment and two years, each, on the other two. The latter two sentences were ordered to run concurrently. The judge ruled that the 12-year sentence imposed should become effective upon expiration or legal release from the sentence of life imposed upon them in 1942.

During his early youth in Philadelphia, Charles J. Lovett ran away from home frequently and was often involved in petty thievery. He enlisted in the Army on June 19, 1939, at Philadelphia, Pennsylvania, and was assigned to a Machine Gun Troop, Third Cavalry, Fort Myer, Virginia. His record with the Army was spotted with trouble. Lovett had received two court martials, one for being absent without leave, and the other for reporting for drill while intoxicated. On both occasions he was fined and sentenced to hard labor.

James E. Testerman enlisted in the Army on October 17, 1949, at Richmond, Virginia. He, too, was assigned to a Machine Gun Troop, Third Cavalry, Fort Myer, Virginia. Like Lovett, Testerman had also been in trouble with his superiors. In May, 1941, he was absent without leave. The deserter was returned to Fort Myer, October, 1941, and convicted by court martial, fined, and sentenced to hard labor for several months.

Hubert J. Treacy, Jr., entered FBI service on April 1, 1941. He was born in New York City on January 13, 1913, and attended St. Mary’s Star-of-the-Sea School, Far Rockaway, New York, and St. Francis Xavier High School in New York City. He attended Fordham College for one semester in 1932, and then transferred to Georgetown University, Washington, D.C. He studied there from September 1932 until June 1935, and graduated with an A.B. Degree. He attended St. John’s University Law School, Brooklyn, New York, from 1935 to 1939, receiving his LL.B. Degree and then attended the graduate school for one year. Prior to entering the Bureau’s service he was employed by the Bethlehem Steel Company.

Special Agent Treacy was a member of the Knights of Columbus, Friendly Sons of Saint Patrick of New York, American-Irish Historical Society, and Quartermaster Association. He was survived by his widow, his mother, and two sisters.