Iva Toguri D’Aquino, who gained notoriety as the mythical Tokyo Rose, was the seventh person to be convicted of treason in U.S. history.

Following the Japanese surrender in September 1945, American troops began searching for Japanese military leaders and others who may have committed war crimes. The press—sometimes following, sometimes beating the military to the scene—did the same.

Two of these reporters, Henry Brundidge and Clark Lee, sought “Tokyo Rose,” the notorious siren who tried to demoralize American soldiers and sailors during the war by highlighting their hardships and sacrifices.

Through their legwork and contacts, the two reporters quickly identified one young American woman, Iva Ikuko Toguri D’Aquino, who had made such broadcasts. Brundidge and Lee offered her a significant sum, which they later reneged on paying, for exclusive rights to interview her. D’Aquino agreed, signing a contract that identified her as Tokyo Rose.

The problem for D’Aquino, though, was that Tokyo Rose was not an actual person, but the fabricated name given by soldiers to a series of American-speaking women who made propaganda broadcasts under different aliases.

As a result of her interview with the two reporters, D’Aquino came to be seen by the public—though not by Army and FBI investigators—as the mythical protagonist Tokyo Rose. This popular image defined her in the public mind of the post-war period and continues to color debate about her role in World War II today. 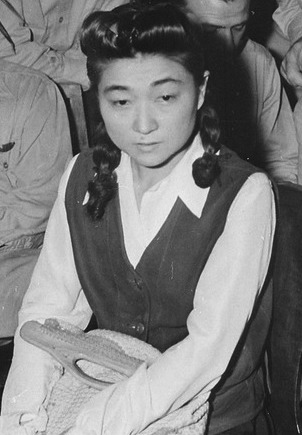 D’Aquino was born Ikuko Toguri in Los Angeles on July 4, 1916. Her father, Jun Toguri, had come to the U.S. from Japan in 1899. Her mother followed in 1913, and the family eventually settled in Los Angeles.

During her school years, Ikuko Toguri used the first name of Iva. She attended grammar schools in Calexico and San Diego before returning with her family to Los Angeles where she finished grammar school and went on to high school and junior college.

Iva Toguri enrolled in the University of California at Los Angeles and graduated in January 1940 with a degree in zoology. She did graduate work there until June of that year. During her school years, Toguri was a popular student and was considered a loyal American. Her favorite pastimes included sports, hiking, and swing music. From June 1940 until July 1941, Toguri assisted her father in his mercantile shop.

On July 5, 1941, Toguri sailed for Japan from San Pedro, California, without a U.S. passport. In subsequent years, she gave two reasons for her trip: to visit a sick aunt and to study medicine.

In September of that year, Toguri appeared before the U.S. Vice Consul in Japan to obtain a passport, stating she wished to return to the U.S. for permanent residence. Because she left the U.S. without a passport, her application was forwarded to the Department of State for consideration. Before arrangements were completed for issuing a passport, Japan attacked America, and war was declared.

She later withdrew the application, saying she would voluntarily remain in Japan for the duration of the war. She enrolled in a Japanese language and culture school to improve her language skills. From mid-1942 until late 1943, Toguri worked as a typist for the Domei News Agency; in August 1943, she obtained a second job as a typist for Radio Tokyo.

In November 1943, Toguri was asked to become a broadcaster for Radio Tokyo on the Zero Hour program. The program was part of a Japanese psychological warfare campaign designed to lower the morale of U.S. Armed Forces. The Zero Hour was broadcast every day except Sunday, from 6 p.m. until 7:15 p.m., Tokyo time. Toguri participated in most weekday broadcasts, but other women handled weekend duties.

Toguri was introduced on the program as “Orphan Ann” or “Orphan Annie.” Toguri’s average time on each program was about 20 minutes, during which she made propaganda statements and introduced popular records of the day, such as “Speak to Me of Love,” “In a Little Gypsy Tea Room,” and “Love’s Old Sweet Song.” The remainder of the program was devoted chiefly to news items from America and general news commentaries by other members of the broadcasting staff.

By late 1944, Toguri was writing her own material for the program. Her salary at Radio Tokyo reportedly amounted to some 150 yen per month—about $7 in U.S. currency. Toguri was not a professional radio personality, but many of those who later recalled hearing her enjoyed the program, especially the music.

As far as its propaganda value, Army analysis suggested that the program had no negative effect on troop morale and that it might even have raised it a bit. The Army’s sole concern about the broadcasts was that “Annie” appeared to have good intelligence on U.S. ship and troop movements.

On April 19, 1945, Iva Toguri married Felipe D’Aquino, a Portuguese citizen of Japanese-Portuguese ancestry. The marriage was registered with the Portuguese Consulate in Tokyo; however, D’Aquino did not renounce her U.S. citizenship. She continued her Zero Hour broadcast until the war was over.

In September 1945, after the press had reported that D’Aquino was Tokyo Rose, U.S. Army authorities arrested her. The FBI and the Army’s Counterintelligence Corps conducted an extensive investigation to determine whether D’Aquino had committed crimes against the U.S. By the following October, authorities decided that the evidence then known did not merit prosecution, and she was released.

Before the year was out, D’Aquino again requested a U.S. passport. American veterans groups and noted broadcaster Walter Winchell learned of this and became outraged that the woman they thought of as “Tokyo Rose” wanted to return to this country. They demanded that the woman they considered a traitor be arrested and tried, not welcomed back.

The public furor convinced the Justice Department that the matter should be re-examined, and the FBI was asked to turn over its investigative records on the matter. The FBI’s investigation of D’Aquino’s activities had covered a period of some five years. During the course of that investigation, the FBI had interviewed hundreds of former members of the U.S. Armed Forces who had served in the South Pacific during World War II, unearthed forgotten Japanese documents, and turned up recordings of D’Aquino’s broadcasts. Many of these recordings, though, were destroyed following the initial decision not to prosecute D’Aquino in 1946.

The Department of Justice initiated further efforts to acquire additional evidence that might be sufficient to convict D’Aquino. It issued a press release asking all U.S. soldiers and sailors who had heard the Radio Tokyo propaganda broadcasts and who could identify the voice of the broadcaster to contact the FBI. Justice also sent one of its attorneys and reporter Harry Brundidge to Japan to search for other witnesses. Problematically, Brundidge enticed a former contact of his to perjure himself in the matter.

With new witnesses and evidence, the U.S. Attorney in San Francisco convened a grand jury, and D’Aquino was indicted on a number of counts in September 1948. She was detained in Japan and brought under military escort to the U.S., arriving in San Francisco on September 25, 1948. There, she was immediately arrested by FBI agents, who had a warrant charging her with the crime of treason for adhering to, and giving aid and comfort to, the Imperial Government of Japan during World War II.

“...on a day during October, 1944, the exact date being to the Grand Jurors unknown, said defendant, at Tokyo, Japan, in a broadcasting studio of the Broadcasting Corporation of Japan, did speak into a microphone concerning the loss of ships.”

This made D’Aquino, who had gained notoriety as Tokyo Rose, the seventh person to be convicted of treason in the history of this country. On October 6, 1949, D’Aquino was sentenced to ten years of imprisonment and fined $10,000 for the crime of treason.

On January 28, 1956, she was released from the Federal Reformatory for Women at Alderson, West Virginia, where she had served six years and two months of her sentence. She successfully fought government efforts to deport her and returned to Chicago, where she worked in her father’s shop until his death. President Gerald Ford pardoned her on January 19, 1977. She passed away in 2006.

Neither Brundidge nor the witness testified at trial because of the taint of perjury. Nor was Brundidge prosecuted for subornation of perjury. According to FBI records available at the National Archives, the Department of Justice thought that the evidence came down to the witness’s word against that of Brundidge.