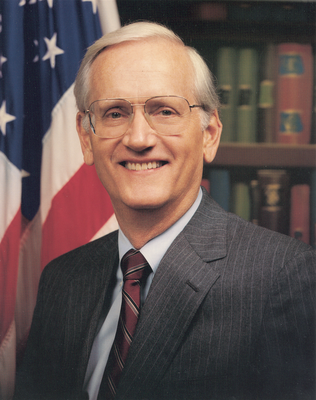 William Steele Sessions was born May 27, 1930 in Fort Smith, Arkansas. He graduated from Northeast High School in Kansas City, Missouri in 1948, and in 1951 he enlisted in the United States Air Force, receiving his wings and commission in October 1952. Thereafter, he served on active duty until October 1955. In 1956 he was awarded a Bachelor of Arts degree from Baylor University, Waco, Texas, and in 1958 he received his LL.B. degree from the Baylor University School of Law.

Judge Sessions was a private practitioner of law in Waco, Texas from 1958 until 1969, when he left his firm, Haley, Fulbright, Winniford, Sessions, and Bice, to join the Department of Justice in Washington, D.C., as chief of the Government Operations Section, Criminal Division. In 1971, he was appointed United States Attorney for the Western District of Texas. In 1974, Judge Sessions was appointed United States District Judge for the Western District of Texas and in 1980 became Chief Judge of that court. He has served on the Board of the Federal Judicial Center in Washington, DC, and on committees of both the State Bar of Texas and the Judicial Conference of the United States.

On November 1, 1987, Judge Sessions resigned his position as United States District Judge to become Director of the FBI and was sworn in on November 2, 1987.

Judge Sessions has received many awards and honors, including: honorary degrees from the John C. Marshall Law School; St. Mary’s University; Dickinson School of Law; and Flagler College. He also received the Baylor University Distinguished Alumni Award; the Baylor Law School’s “Lawyer of the Year” for 1988; “Father of the Year” for public service by the National Father’s Day Committee; the Golden Plate Award from the American Academy of Achievement; the 1989 Law Enforcement Leadership Award from the Association of Federal Investigators and the DAR Medal of Honor; the Distinguished Eagle Scout Award in 1990; the Good Scout Award; the “Person of the Year” Award from the American Society for Industrial Security; the 1990 Magna Charta Award from the Baronial Order of the Magna Charta; and the Ellis Island Congressional Medal of Honor in 1992.