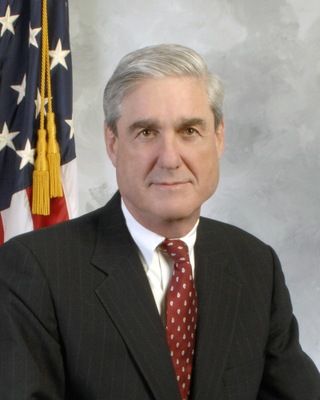 Robert Mueller was nominated by President George W. Bush and became the sixth Director of the FBI on September 4, 2001.

Born in New York City, Mr. Mueller grew up outside of Philadelphia. He graduated from Princeton University in 1966 and later earned a master’s degree in International Relations at New York University.

After college, he joined the United States Marine Corps, where he served as an officer for three years, leading a rifle platoon of the Third Marine Division in Vietnam. He is the recipient of the Bronze Star, two Navy Commendation Medals, the Purple Heart, and the Vietnamese Cross of Gallantry.

Following his military service, Mr. Mueller earned a law degree from the University of Virginia Law School in 1973 and served on the Law Review.

After completing his education, Mr. Mueller worked as a litigator in San Francisco until 1976. He then served for 12 years in United States Attorney’s Offices, first in the Northern District of California in San Francisco, where he rose to be chief of its criminal division. In 1982, he moved to Boston as an Assistant United States Attorney, where he investigated and prosecuted major financial fraud, terrorist, and public corruption cases, as well as narcotics conspiracies and international money launderers.

After serving as a partner at the Boston law firm of Hill and Barlow, Mr. Mueller returned to public service. In 1989 he served in the United States Department of Justice as an assistant to Attorney General Richard L. Thornburgh. The following year he took charge of its Criminal Division. In 1991, he was elected Fellow of the American College of Trial Lawyers.

In 1993, Mr. Mueller became a partner at Boston’s Hale and Dorr, specializing in complex white collar crime litigation. He again returned to public service in 1995 as senior litigator in the Homicide Section of the District of Columbia United States Attorney’s Office. In 1998, Mr. Mueller was named United States Attorney in San Francisco and held that position until 2001.

Mr. Mueller and his wife, Ann, have two daughters.