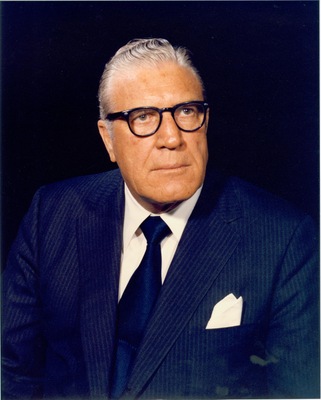 Mr. Kelley entered on duty with the FBI as a special agent on October 7, 1940. He gained extensive experience in many important fields of investigative activity early in his FBI career while he served in field offices in Huntington, West Virginia; Pittsburgh, Pennsylvania; Des Moines, Iowa; and the FBI Training Center, Quantico, Virginia, as a firearms instructor.

He was on military leave from the FBI while serving in the United States Navy from July 22, 1944 to April 9, 1946. Mr. Kelley’s service in the Navy included a tour of duty aboard a transport attack ship in the South Pacific.

Mr. Kelley’s first assignment after his return from military service during 1946 was in the Kansas City office. Based on his outstanding ability and performance, he was assigned supervisory duties at FBI Headquarters in Washington, D.C. in 1951. Later that same year, Mr. Kelley returned to the Kansas City Division as a field supervisor.

Following his assignment in San Francisco, Mr. Kelley was transferred to the Training and Inspection Division at FBI Headquarters and shortly thereafter he was designated as an inspector.

After his retirement, Mr. Kelley became the Chief of Police in Kansas City, Missouri. During the time he held this position, he was on the Board of Directors of the Boys’ Club and the United Fund. He also held membership in the Society of Former Special Agents of the Federal Bureau of Investigation; the Chamber of Commerce; and Rotary International. Mr. Kelley was also on the Executive Committee of the International Association of Chiefs of Police and was a member of both the Missouri Chiefs of Police Association and the Tennessee and Mississippi Peace Officers Association. He is a past president of the Missouri Peace Officers Association.

In 1970, he received the J. Edgar Hoover Gold Medal for Outstanding Job Service, presented by the Veterans of Foreign Wars. He was named to the Presidential Advisory Committee, which was headed by former Director Hoover in 1971. Mr. Kelley, in 1972, received the Outstanding Officer of the Year Award, presented by the Metropolitan Chiefs and Sheriffs Association. In addition, Mr. Kelley served on the National Advisory Commission on Criminal Justice Standards and Goals and on the FBI National Academy Review Committee, both during the period 1972-1973. He served as chairman of the Florida Governor’s Task Force to Evaluate Public Safety and Related Support Services at the 1972 National Political Convention.

After assuming the directorship of the FBI, he received numerous honors and awards: the Alumnus of the Year of the Kansas City School of Law at the University of Missouri; the 17th Annual Award from the Society of Professional Investigators; Honorary Trustee of the Boys’ Club of Greater Washington; and Honorary Doctor of Laws Degrees from Baker University, Baldwin City, Kansas; and, Culver-Stockton College, Canton, Missouri.

He became a Life Elder of his church, Country Club Christian Church, Kansas City on May 4, 1975. On December 17, 1975, Mr. Kelley was elected to the Board of Directors of the Menorah Medical Center Foundation in Kansas City, Missouri. In April 1976, he was elected to a five-year term as Advisory Trustee of the University of Missouri - Kansas City Law Foundation.

Mr. Kelley received the Harry S. Truman Commemorative Good Neighbor Award in May 1976 from the Eddie Jacobson Memorial Foundation in Kansas City, Missouri. He participated in the John Findley Green Lecture Series at Westminister College in Fulton, Missouri in May, 1976, and on that occasion an honorary Doctor of Political Science Degree was conferred upon him.