On May 1, 2015, FBI Director James B. Comey will personally present the award to Wehrenberg Theatres and other honorees at a national ceremony at FBI Headquarters in Washington D.C.

Last June, Wehrenberg launched a partnership with the FBI to help publicize safety messages and Amber Alerts. As a public service, Wehrenberg shows the brief messages during movie previews when space is available on any of its 218 movie screens. “The key to preventing crime is to be informed,” said SAC Woods. “Showing public safety messages during movie previews are another way to inform people, some we may not have reached otherwise.” 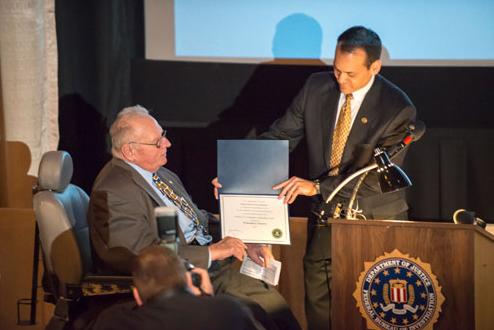 Wehrenberg, based in St. Louis, owns 16 theatres in Missouri, Illinois, Iowa, and Minnesota. It is the oldest family-owned and operated theatre chain in the country.

In 2014, Wehrenberg donated almost $1.9 million in cash and in-kind services to all its charitable partners. One initiative Wehrenberg supported for years is the Child Identification program. Wehrenberg teams up with Missouri Masonic Family and provides space at its theatres for the Masons to digitally photograph and fingerprint children. Wehrenberg donated more than $25,000 to start this program and $25,000 of high-tech equipment for these events. “We could not be more impressed with Missouri Masonic Family’s MOCHIP program,” said Ronald P. Krueger, President of Wehrenberg Theatres Inc. He added, “Our donation provided immediate and definitive benefits to families with small children. Anything to save one child, or to give peace of mind to parents against the unthinkable, is an easy decision to make. The good this program does has been documented as missing children have been found due in part to the services of MOCHIP and the diligent work of law enforcement agents.”

Wehrenberg was also the first in St. Louis to offer free movies during the summer when children are out of school. For nearly two decades, the chain brought previously-released family films back to the big screen during summer months. Only recently, it added a nominal $1 charge to cover rising studio rental fees.

The FBI formally created the DCLA in 1990 as the principle means to honor individuals or organizations for their efforts in combating crime, terrorism, drugs, and violence to help keep America and its kids safe.

Past St. Louis DCLA honorees (years not listed did not have a recipient):