The FBI is offering a reward of up to $50,000 for information leading to the arrest and conviction of Lyle Steed Jeffs, believed to be a leader in the Fundamentalist Church of Jesus Christ of Latter-Day Saints (FLDS).

Jeffs is wanted for absconding from home confinement in Salt Lake City, Utah sometime during the weekend of June 18-19, 2016. He was released from jail on June 9, 2016 awaiting trial for his alleged involvement in a multi-million-dollar food stamp fraud case.

The indictment alleged that church-controlled businesses were used to divert church members' SNAP benefits from authorized users to leaders of the church and then used for illegal purposes.

A federal arrest warrant was issued for Jeffs in the United States District Court, District of Utah on June 19, 2016 after Jeffs was charged with alleged violation of conditions of pretrial release.

Anyone with information on the case is asked to contact the nearest FBI field office or American Embassy or Consulate. 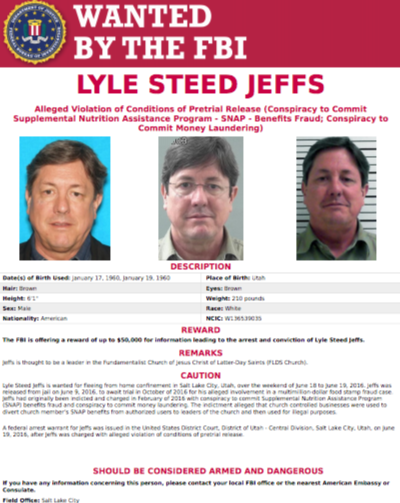