Investigators assigned to the FBI Richmond Division’s Central Virginia Violent Crimes Task Force requests the public’s assistance in identifying the person(s) responsible for armed robberies that occurred at a Shell convenience store located in Chesterfield, Virginia, on October 6 and October 12, 2018.

On October 6, 2018, an unknown male subject entered the SHELL convenience store located in the 9400 block of Iron Bridge Road in Chesterfield, Virginia.  The subject, armed with a bladed weapon, approached the victim clerk stating it was a “stick up” at which point the subject opened the stores register and took money from the drawer.  The subject is described as a white male, approximately 5’7”, thin/slender build; wearing a black hooded sweatshirt drawn tightly around his face, sunglasses, a fanny-pack, and black gloves.

The logo on the sweatshirt worn by the individual during this robbery has been identified as that of American Tile LLC.

On October 12, 2018, an unknown male subject entered the same convenience store armed with a bladed weapon and told the victim clerk to “step back”.  The subject tried several times unsuccessfully to open the register, and as he exited the convenience store knocked over a display.  The subject is described as a black male, approximately 6’0", medium build; wearing a gray hooded sweatshirt drawn tightly around his face with “Baltimore” written across the front of it, black pants, dark colored shoes with white bottoms, a black mask, and goggles.

Please contact the Richmond Division of the FBI at 804-261-1044 or tips.fbi.gov with information that may lead to the identification of the person(s) responsible for these robberies. 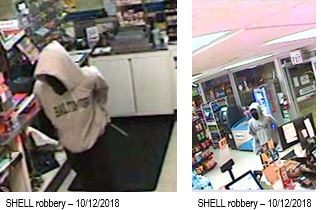