COLUMBUS, OH—Special Agent in Charge Angela L. Byers of the Cincinnati Division of the Federal Bureau of Investigation (FBI) announced today that the painting Portrait of a Young Man by Polish painter Krzysztof Lubieniecki has been returned to officials with the government of Poland. The work of art is believed to have been looted by Nazi soldiers from the National Museum in Warsaw, Poland during World War II.

“We are honored to return this painting to the Polish government and the National Museum,” stated Special Agent in Charge Byers. “This was truly a cooperative effort among the U.S. government and our international partners to ensure this work of art was returned to its homeland.”

The painting Portrait of a Young Man is purported to have been taken by the Nazis along with other artwork from the National Museum in Poland in October 1944. From there, the Nazis reportedly took the artwork to a palace in Austria. The Portrait of a Young Man was apparently later discovered by a U.S. serviceman while in Austria. The soldier is believed to have brought the artwork to the United States after his service abroad. Years after the former serviceman’s death, the painting was sold to innocent purchasers in the Columbus, Ohio area, where it remained for many years. In recent years, a relative of the former serviceman who was conducting family genealogy research came across photos of the painting. Upon further research, it was learned that the painting was taken from the National Museum and the relative made efforts to contact Poland’s Ministry of Culture. Upon learning of the historic rights of the painting, the possessors agreed to return the work to Poland.

During a brief repatriation ceremony in the FBI’s Columbus Resident Agency, the painting was turned over to officials with the Polish Ministry of Cultural and National Heritage. The Ministry’s Division for Looted Art works to gather information on cultural property lost as a result of World War II. The agency also searches for and recovers this lost cultural property when it is located in Poland and abroad.

The painting, entitled Portrait of a Young Man, was created around 1728 by Polish artist Krzysztof Lubieniecki (1659-1729). Lubieniecki was a Polish Baroque painter and engraver active in Amsterdam during the Dutch Golden Age.

SAC Byers thanked the FBI’s Warsaw Legal Attaché and the FBI’s Art Crime Team, including Special Agents assisting from the Chicago Field Office, for their work locating this piece of art and determining its historical significance. 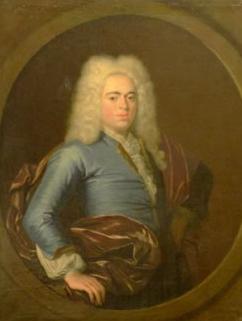 Portrait of a Young Man by Polish painter Krzysztof Lubieniecki