On August 29, 2022, two Mexican nationals, Gerardo Madrigal Quintero, 23, of Culiacan, Mexico, and Joel Enrique Armenta Castro, 30, of Mochis, Sinaloa, Mexico, were taken into custody by FBI Boston special agents and task force officers assigned to Boston’s Organized Crime Drug Enforcement Strike Force, and Massachusetts State Police Troopers assigned to the Westfield, Massachusetts barracks. Both men have been charged by the state with trafficking in 200 grams or more of cocaine, and conspiracy to violate drug law.

As a result of this operation, approximately 15 kilograms of cocaine was seized, along with the tractor trailer that Mr. Quintero was driving.

During an FBI investigation, investigators developed information that two Mexican suppliers were heading to Massachusetts to deliver a large load of cocaine from Mexico 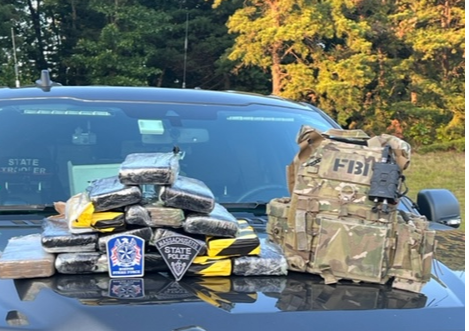 With assistance from the Massachusetts State Police’s Commercial Vehicle Enforcement Section and Air Wing, and the FBI Boston Division’s Springfield office, investigators tracked the tractor trailer driven by Mr. Quintero to the Ludlow Service Plaza. After witnessing an exchange of narcotics between Mr. Quintero and Mr. Castro, Mr. Castro was subsequently taken into custody. Shortly after that, Massachusetts State Police stopped the tractor trailer being driven by Mr. Quintero, on Route 91 South in Longmeadow, and took him into custody without incident.

“These arrests are a direct result of the hard work and dedication shared between federal, state, and local law enforcement in our efforts to identify and remove large-scale drug traffickers from our communities,” said Joseph R. Bonavolonta, Special Agent in Charge of the FBI Boston Division. “In preventing 15 kilos of cocaine from Mexico from hitting Massachusetts streets, there’s no question our neighborhoods and citizens are much safer.”

Massachusetts State Police Colonel Christopher Mason added, “The cocaine that troopers, agents, and task force officers prevented from reaching the streets of Massachusetts through this investigation was worth more than half a million dollars to its suppliers in Mexico. Had it reached its destination it would have been cut up, packaged, and sold throughout our communities, and it would have caused violence, ruined families, and ended lives. The Massachusetts State Police will continue to work with our law enforcement and prosecutorial partners to interdict drug traffickers and their deadly product.”

“The threats to public health and safety posed by narcotic traffickers and the illicit drug trade are significant and widespread,” said Hampden County District Attorney Anthony Gulluni. “This very substantial seizure comes with a tremendous amount of work, and I thank the agencies involved for their vigilance, resources, and expertise in combating these very dangerous individuals and the organizations they serve.”

This case is being investigated by the Boston Organized Drug Enforcement Strike Force that includes the FBI Boston Division, members of the Massachusetts State Police Narcotics Section, the Concord, Hudson, Peabody, Reading, Waltham and Watertown Police Departments, the Massachusetts Department of Correction, and the Norfolk County Sheriff’s Department.

The cases are being prosecuted by the Hampden County District Attorney’s Office. All charged individuals are presumed innocent until and unless proven guilty beyond a reasonable doubt.