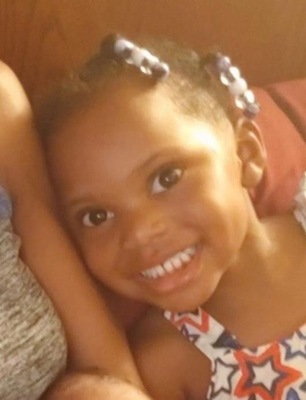 The FBI is offering a reward of up to $10,000 for information leading to the identification and arrest of the individual(s) responsible for the homicide of Joette "JoJo" Malone.

The Federal Bureau of Investigation's Indianapolis Field Office, along with the Hammond Police Department in Indiana, are seeking the public's assistance in identifying the unknown individual(s) responsible for the murder of Joette "JoJo" Malone on July 29, 2020.

JoJo, who was 2 years old at the time of her death, was seated in the back seat of her mother’s vehicle when she was shot on July 29, 2020, at approximately 9:30 p.m.  The vehicle was parked in the parking lot at the Kennedy Crossing apartment complex in Hammond, Indiana. The vehicle appeared to have its rear driver’s side window shot out.  JoJo was flown by helicopter to a children’s hospital in Chicago, Illinois, where she later died from the injuries sustained in the shooting.

Anyone with information related to this homicide is asked to please contact the FBI's Indianapolis Field Office at (317) 595-4000, the Hammond Police Department Investigations Division at (219) 852-2906, or submit tips online at tips.fbi.gov. You may also contact your local FBI office, or the nearest American Embassy or Consulate.