For the first time in four years, the estimated number of violent crimes in the nation increased when compared with the previous year’s statistics, according to FBI figures released today. In 2020, violent crime was up 5.6 percent from the 2019 number. Property crimes dropped 7.8 percent, marking the 18th consecutive year the collective estimates for these offenses declined.

The 2020 statistics show the estimated rate of violent crime was 387.8 offenses per 100,000 inhabitants, and the estimated rate of property crime was 1,958.2 offenses per 100,000 inhabitants. The violent crime rate rose 5.2 percent when compared with the 2019 rate; the property crime rate declined 8.1 percent.

These and additional data are presented in the 2020 edition of the FBI’s annual report Crime in the United States. This report is available as downloadable spreadsheets and topic pages about offenses, arrests, and police employee data reported by law enforcement agencies voluntarily participating in the FBI’s Uniform Crime Reporting (UCR) Program. 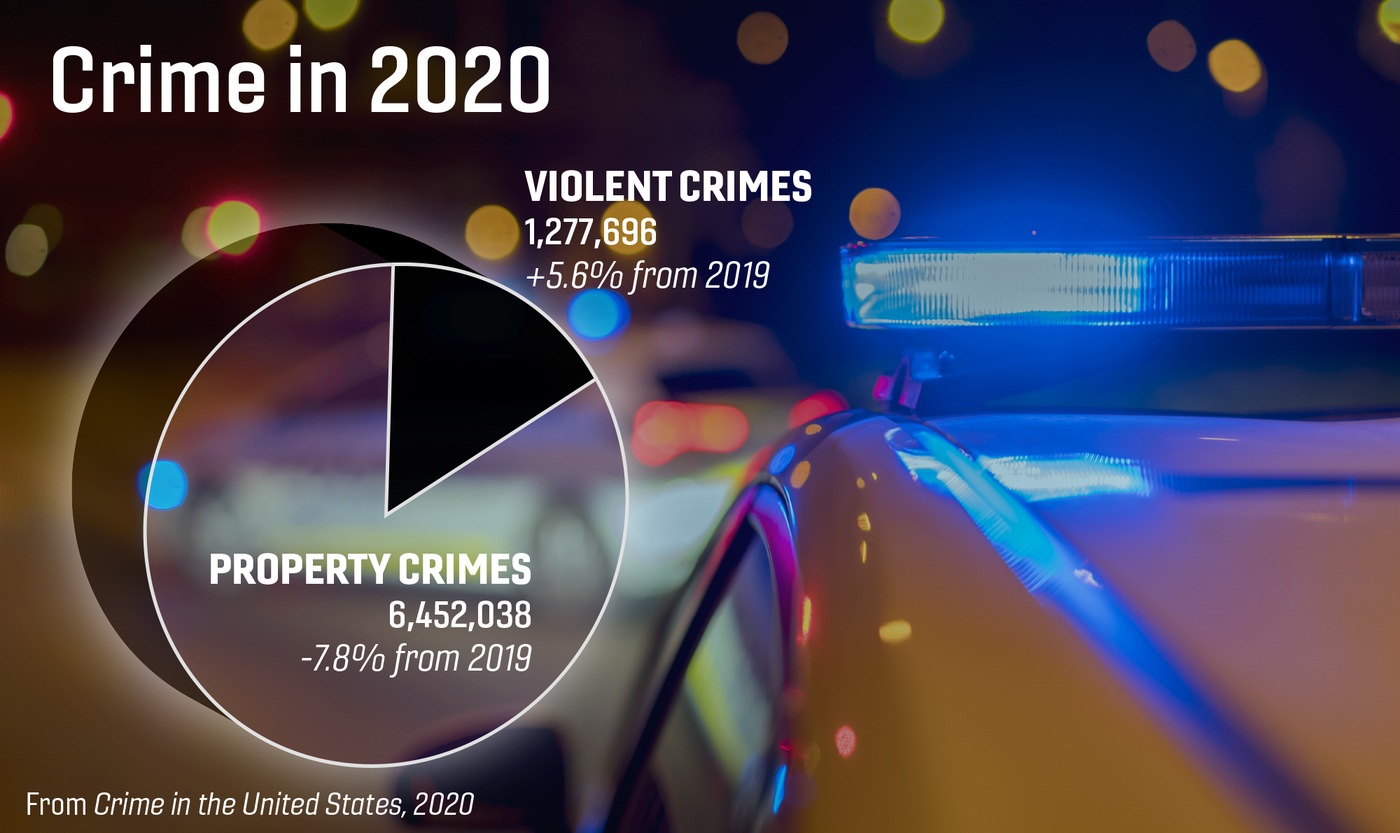 The UCR Program collects information on crimes reported by law enforcement agencies regarding the violent crimes of murder and nonnegligent manslaughter, rape, robbery, and aggravated assault, as well as the property crimes of burglary, larceny-theft, motor vehicle theft, and arson. (The FBI classifies arson as a property crime but does not estimate arson data because of variations in the level of participation by the reporting agencies. Consequently, arson data is not included in the property crime estimate.) The program also collects arrest data for the offenses listed above and 20 offenses that include all other crimes except traffic violations.

Of the 18,619 federal, state, county, city, university and college, and tribal agencies eligible to participate in the UCR Program, 15,897 agencies submitted data in 2020. A high-level summary of the statistics submitted, as well as estimates for those agencies that did not report, follows:

Caution Against Ranking—Each year when Crime in the United States is published, some entities use the figures to compile rankings of cities and counties. These rough rankings provide no insight into the numerous variables that mold crime in a particular town, city, county, state, tribal area, or region. Consequently, they lead to simplistic and/or incomplete analyses that often create misleading perceptions adversely affecting communities and their residents. Valid assessments are possible only with careful study and analysis of the range of unique conditions affecting each local law enforcement jurisdiction. The data user is, therefore, cautioned against comparing crime data of individual reporting units from cities, metropolitan areas, states, or colleges or universities solely on the basis of their population coverage or student enrollment.

The downloadable files of Crime in the United States, 2020, are available on the UCR’s Crime Data Explorer.