In 2011 al-Jawlani, also known as Abu Mohammed al-Jawlani, Abu Mohammed al-Julani, and Abu Muhammad al-Golani, established ANF. In 2013, al-Jawlani, as a leader of ANF, pledged the organization’s allegiance to al Qaeda and its leadership. In 2016, al-Jawlani claimed that the ANF was changing its name to Jabhat Fath Al Sham, or "Conquest of the Levant Front," which has also been known as Jabhat al-Nusrah, Jabhet al-Nusra, The Victory Front, and al-Nusrah Front for the People of the Levant. 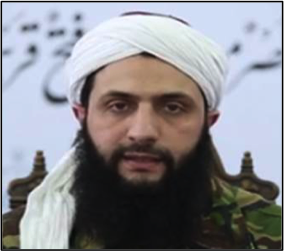 Al Jawlani in a 2016 interview

Individuals with information regarding ANF leadership, to include al-Jawlani, are asked to contact the FBI or the nearest American Embassy or Consulate. Individuals also may submit a tip on the FBI’s website by visiting tips.fbi.gov or on the U.S. Department of State’s Rewards for Justice website at rewardsforjustice.net. Tips can remain confidential.