LAWRENCEVILLE, GA—The FBI is offering a $2,500 reward for information that leads to the arrest of Robert Maurice Carlisle (aka “Different”) of Lithonia, Georgia. Carlisle is wanted by the FBI on a federal warrant for Unlawful Flight to Avoid Prosecution (UFAP). He is wanted by the Gwinnett County Police Department on state warrants for two counts of Concealing the Death of Another and two counts of Participating in Criminal Gang Activity.

Carlisle, age 32, is described as being 5’10” tall, weighing 170 pounds, with black hair and brown eyes. He should be considered armed and dangerous. He is known to hang out around the Lithonia, Stone Mountain and Decatur areas.

Carlisle is wanted in connection with the deaths of Derrick D. Ruff, 25 and Joshua L. Jackson, 25. Their bodies were found inside a storage unit at the Extra Space Storage located at 2040 Lawrenceville Highway in unincorporated Lawrenceville on Sunday, March 17, 2019. Both victims died from gunshot wounds.

Anyone with information about Carlisle’s whereabouts is asked to contact FBI Atlanta at 770-216-3000.

The FBI would like to thank the Outdoor Advertising Association of Georgia (OAAG) and its members for their public service in placing Carlisle’s wanted poster on their electronic billboards throughout the metro Atlanta area.

The public should be reminded that the above are merely allegations and that all persons are to be considered innocent until proven guilty in a court of law. 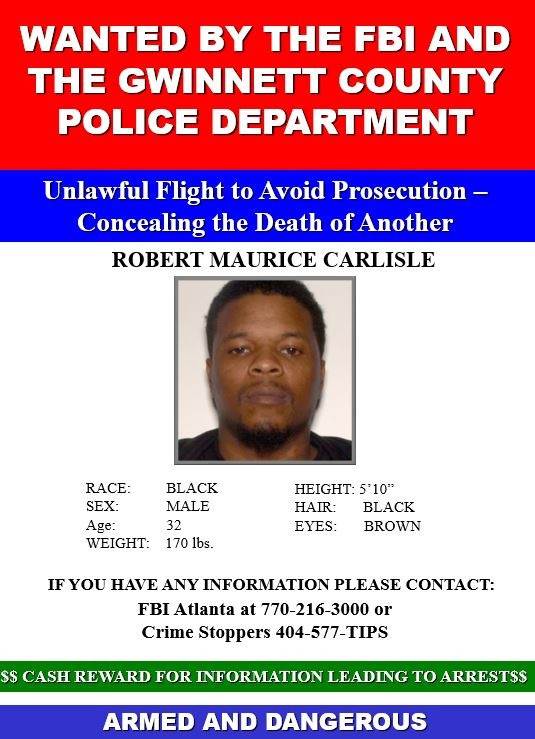