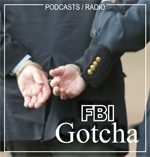 A shooting on Father’s Day sends two dads and a third man running for their lives.

Mollie Halpern: A shooting on Father’s Day sends two dads and a third man running for their lives.

Halpern: I’m Mollie Halpern of the FBI, and this is Gotcha. Three men from Mexico lived in a house which belonged to their employer while they performed seasonal work for him. Johnny Mathis, of Rapides Parish, Louisiana, did not like that the Mexicans lived across the street from him. Case agent Pamela McCarthy…

McCarthy: He used racial slurs and said that he wished that they would return to Mexico.

Halpern: In 2008, Mathis walked out of his house armed with a shotgun. He fired three shots at the men’s home.

McCarthy: They initially hid behind some vehicles that were parked in their drive.

Halpern: Mathis entered their home twice with a shotgun. The second time he lit the house on fire…

McCarthy: And then he actually circled the home before going back across the street to his own house.

Halpern: The house was a total loss.

McCarthy: He drove them from their home, and he intended to do that without a doubt.

Halpern: Mathis was sentenced to 15 years in prison for violating a federal civil rights law. Thanks for listening to the FBI’s closed case of the week.