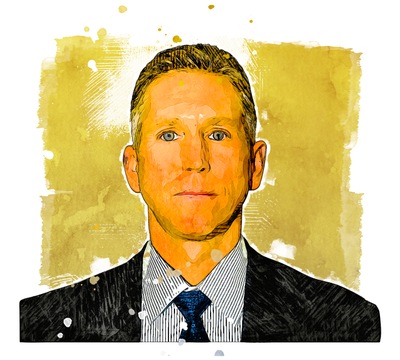 Special Agent W.J. was based in the Brooklyn-Queens Resident Agency but was in the city for an interview the morning of September 11. He was working on an organized crime squad at the time. He was nearly killed in the collapse of the North Tower.

Once the tower started to collapse we all had to run.

There was no exit for me and I saw a fire truck. It was Engine Company 21, was the fire truck.

And I saw the door open in the cabin. There was another emergency worker that was immediately in front of me. This was all happening in seconds.

All this time I'm getting pelted with the debris from the top floors that were starting to come down.

The building had collapsed on the rear end of the fire truck blowing out all the windows.

At that moment I took a gasp of air and it was just cement. And unfortunately I began to suffocate.

I started to pat around in the fire truck through the debris. And while the tower was still collapsing on the back of the truck, knowing that I only had a few seconds, I found a fireman's mask.

The fireman had stayed home sick that day. And etched in the glass of the mask was his name, Chris Magnussen.

But I put that mask over my face and that's what saved my life.

He is always in my heart because he kept me alive, unknowingly,

But that day I felt it didn’t matter if you're a fireman, police officer or FBI agent, you're all brothers doing what you had to do.