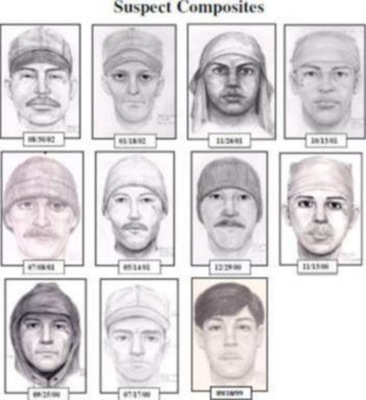 The FBI is offering a reward of up to $25,000 for information leading to the identity, arrest and prosecution of the person responsible for this series of sexual assaults.

The unknown suspect may have a mustache and a light complexion. He has worn a dark, hooded sweatshirt and a green bandana, black baseball cap or dark-colored beanie to cover his head. The unknown suspect has carried a handgun or a knife.

The Los Angeles Police Department and the Federal Bureau of Investigation are asking for the public's assistance in identifying an individual responsible for a series of sexual assaults in the Los Angeles, California, area.

Between 1996 and 2012, there have been 32 similar reports of sexual assault in Los Angeles, California. These incidents have occurred in the 77th, Southwest, Newton, Wilshire, Rampart, and Southeast areas of the city. It is believed that the same suspect is responsible for all of these incidents, as well as three additional incidents being investigated by the Los Angeles County Sheriff's Department.

The suspect typically approaches women who are alone and on their way to school or work, or are waiting at a bus stop, between the hours of 5:15 AM and 8:00 AM. The suspect converses with the victim, then threatens to kill the victim with a handgun or a knife. The suspect then forces the victim from the sidewalk to a secondary location, where he sexually assaults her.