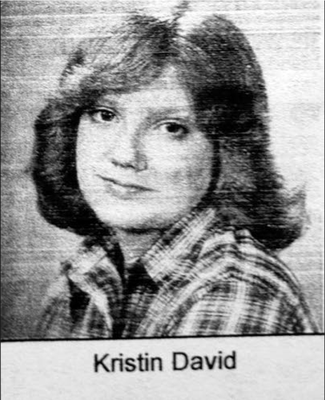 Kristin Noel David, a 22-year-old senior at the University of Idaho, was last seen alive on Friday, June 26, 1981, while bicycling from Moscow, Idaho southward on U.S. Highway 95 towards Lewiston, Idaho. On July 4, 1981, David's dismembered remains began to be discovered in and along the Snake River six miles west of Clarkston, Washington, in an area just west of Silcott Island. Some, but not all, of the remains were recovered elsewhere along the river the next day. The remains had been concealed inside black plastic bags and some of the body parts were wrapped in pages from various April 1981 editions of the local newspaper. David’s blue 10-speed bicycle, clothing, and other personal items were never recovered.

Early in the investigation, multiple individuals traveling Highway 95 on the day of David’s disappearance reported seeing a female cyclist matching David’s description being approached by a man driving a brown van on the west, or southbound, side of the highway just outside Genesee, Idaho. Additional reports suggest the same man also spoke with or approached different female cyclists or pedestrians along Highway 95 the same day.

If you have any information concerning this case or concerning the unknown suspect described above, please visit tips.fbi.gov or call 1-800-CALL-FBI.