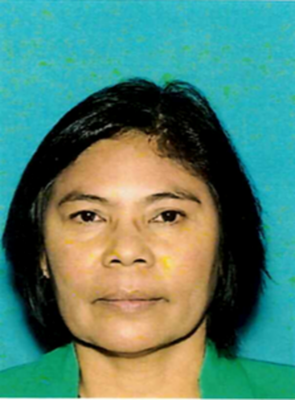 Helen Panilag is wanted for her alleged participation in a labor trafficking scheme that brought church members of a Philippines-based church to the United States, via fraudulently obtained visas, and forced the members to solicit donations for a bogus charity, donations that actually were used to finance church operations and the lavish lifestyles of its leaders. Members who proved successful at soliciting for the church allegedly were forced to enter into sham marriages or obtain fraudulent student visas to continue soliciting in the United States year-round.

Panilag is the alleged one-time top church administrator in the United States who oversaw the collection of financial data from church operations around the globe. Panilag was indicted for conspiracy by a federal grand jury in the United States District Court for the Central District of California, Santa Ana, California, and on November 10, 2021, a federal warrant was issued for her arrest.