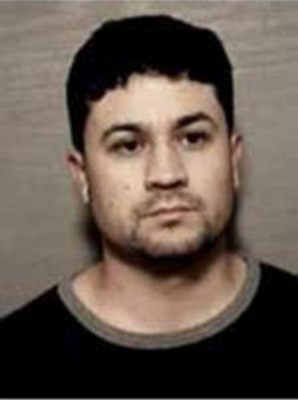 Molina-Neave, who was born in Mexico, has told people he was born in El Paso, Texas, where he attended elementary and junior high schools. The fugitive has ties to Colorado, Texas, California, and Mexico.

The assault continued until a passer-by showed up and ran over to the girlfriend. Molina-Neave then fled the area. The passer-by flagged down a vehicle occupied by additional witnesses who reportedly saw the beating. The passer-by asked the witnesses in the car to attempt to locate the suspect. They agreed to help and spotted Molina-Neave a short distance away. They told Molina-Neave to stop and that they had called the police. The suspect fled down an alley as police arrived. While setting up the perimeter the police heard two gunshots fired from the alley where the suspect was last seen. The gunshots were fired by two different guns. The officers observed the witness vehicle speed out of the alley. The witnesses were screaming that the same suspect, along with another Hispanic male, had allegedly shot at them and their vehicle. One of the occupants in the vehicle was screaming that she had been shot as well.

On January 21, 1999, a jury found Francisco Molina-Neave guilty on charges of first degree assault, attempted first degree assault, prohibited use of a weapon, and third degree assault. Molina-Neave fled from the courtroom as the verdict was read. A warrant was then issued for his arrest. On May 17, 2006, Francisco Molina-Neave was arrested on the warrant from Denver in San Antonio, Texas. He refused extradition, and a Texas court allowed him to post bond pending his extradition appeal. The suspect failed to appear and was arrested in mid-May of 2007. The Texas court set his bond for one million dollars. Molina-Neave posted the bond and was released. His appeal was denied on October 4, 2007, and he fled again. On March 13, 2008, a federal arrest warrant was issued for Molina-Neave, and he was charged with unlawful flight to avoid prosecution.

SHOULD BE CONSIDERED DANGEROUS AND AN ESCAPE RISK