The National Crime Information Center, or NCIC, has been called the lifeline of law enforcement—an electronic clearinghouse of crime data that can be tapped into by virtually every criminal justice agency nationwide, 24 hours a day, 365 days a year. It helps criminal justice professionals apprehend fugitives, locate missing persons, recover stolen property, and identify terrorists. It also assists law enforcement officers in performing their duties more safely and provides information necessary to protect the public.

How NCIC is Used: Criminal justice agencies enter records into NCIC that are accessible to law enforcement agencies nationwide. For example, a law enforcement officer can search NCIC during a traffic stop to determine if the vehicle in question is stolen or if the driver is wanted by law enforcement. The system responds instantly. However, a positive response from NCIC is not probable cause for an officer to take action. NCIC policy requires the inquiring agency to make contact with the entering agency to verify the information is accurate and up-to-date. Once the record is confirmed, the inquiring agency may take action to arrest a fugitive, return a missing person, charge a subject with violation of a protection order, or recover stolen property.

The policy facet provides a means for user input on NCIC policy through the Criminal Justice Information Services (CJIS) Advisory Policy Board. The board enables NCIC users to make recommendations to the FBI Director for policy and operational enhancements to the system. The CJIS Division actively promotes the use of the system and its benefits through daily interaction with users—whether by phone, video teleconference, or e-mail; attendance at meetings and seminars; and via the advisory process.

The functional facet provides a means for agencies to access NCIC. The FBI provides a host computer and telecommunication lines to a single point of contact in each of the 50 states, the District of Columbia, Puerto Rico, the U.S. Virgin Islands, Guam, and Canada, as well as federal criminal justice agencies. Those jurisdictions, in turn, operate their own computer systems, providing access to nearly all local criminal justice agencies and authorized non-criminal justice agencies nationwide. The entry, modification, and removal of records are the responsibility of the agency that entered them. The CJIS Division serves as the custodian of NCIC records.

Security and Quality Controls: The head of the CJIS Systems Agency—the criminal justice agency that has overall responsibility for the administration and usage of NCIC within a district, state, territory, or federal agency—appoints a CJIS Systems Officer (CSO) from its agency. The CSO is responsible for monitoring system use, enforcing system discipline and security, and assuring that all users follow operating procedures. NCIC policy establishes a number of security measures to ensure the privacy and integrity of the data. The information passing through the network is encrypted to prevent unauthorized access. Each user of the system is authenticated to ensure proper levels of access for every transaction. To further ascertain and verify the accuracy and integrity of the data, each agency must periodically validate its records. Agencies also must undergo periodic audits to ensure data quality and adherence to all security provisions.

NCIC Success Story: Recently, a special agent with the U.S. Forest Service contacted the NCIC staff at the CJIS Division for assistance with off-line searches of purged NCIC records and past transactions in connection with a significant drug trafficking investigation in the Midwest. Several crucial off-line searches connected names of individuals with specific vehicles. This connection assisted in locating and identifying suspects associated with the case, and was invaluable in following the suspects’ activities in relation to moving people, money, and products. To date, 20 people have been arrested and convicted, with more subjects identified and additional information regarding the drug trafficking organization uncovered. Approximately $1 million worth of property, illegal drugs, and contraband was seized, including marijuana, cocaine, firearms, vehicles, and cash.

In the 1960s, Director J. Edgar Hoover presided over the meeting during which the decision was made to implement a computer system that would centralize crime information from every state and provide that information to law enforcement throughout the nation. Working with the International Association of Chiefs of Police, the FBI created an advisory board made up of state and local police to develop nationwide standards and consulted with the Commerce Department to build an effective telecommunications system. On January 27, 1967, the system was launched on 15 state and city computers that were tied into the FBI's central computer in Washington, D.C.—which at that time contained five files and 356,784 records on things like stolen autos, stolen license plates, stolen/missing guns, and wanted persons/fugitives. In its first year of operation, NCIC processed approximately 2.4 million transactions, an average of 5,479 transactions daily. 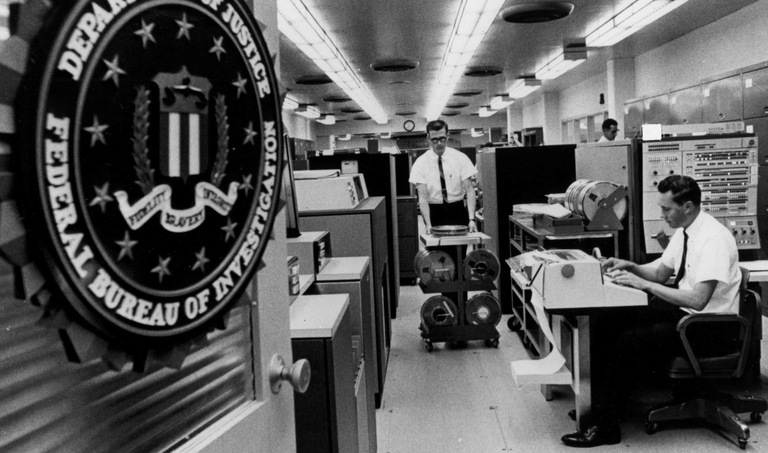 On January 27, 1967, the FBI launched the National Crime Information Center, or NCIC, an electronic clearinghouse of criminal justice information (mug shots, crime records, etc.) that can be tapped into by police officers in squad cars or by police agencies nationwide.

The first hit came in May 1967, when a New York City police officer—suspicious of a parked car—radioed in a request for an NCIC search of the license plate. Within 90 seconds, he was informed that the car had been stolen a month earlier in Boston. We got a report that the patrolman exclaimed, "It works! It works!" The most recent generation of NCIC became operational on July 11, 1999, enhancing the base capabilities of the legacy system and adding important new files. Some of the new capabilities include: the ability to accept, store, and retrieve digital images; expanded fields; and delayed inquiry notification. The delayed inquiry provides a capability for the system to automatically extract certain descriptive data from entries and use it to search the transaction log for inquiries conducted up to five days prior to the entry. Notifications are sent to both the entering and inquiring agency for further investigation.

Following the terrorist attacks of 9/11, the NCIC’s Violent Gang and Terrorist Organization File (VGTOF), took on added significance. Although the file had been a part of the NCIC since 1995, it contained few records. After 9/11, it became a central collection point for information about terror suspects. Within three years, the VGTOF grew to contain more than 100,000 records and was recently split into two separate files. On December 23, 2003, NCIC processed 4,712,643 transactions, with an average response time of .1119 seconds. On August 4, 2006, NCIC set a new record for transactions processed on a single day—6,050,879. The average response time—the time it takes for NCIC to receive, process, and respond to an inquiry—for these transactions was 0.0566 seconds. In January 2007, NCIC celebrated its 40th anniversary with a ceremony at the CJIS Division in Clarksburg, West Virginia.