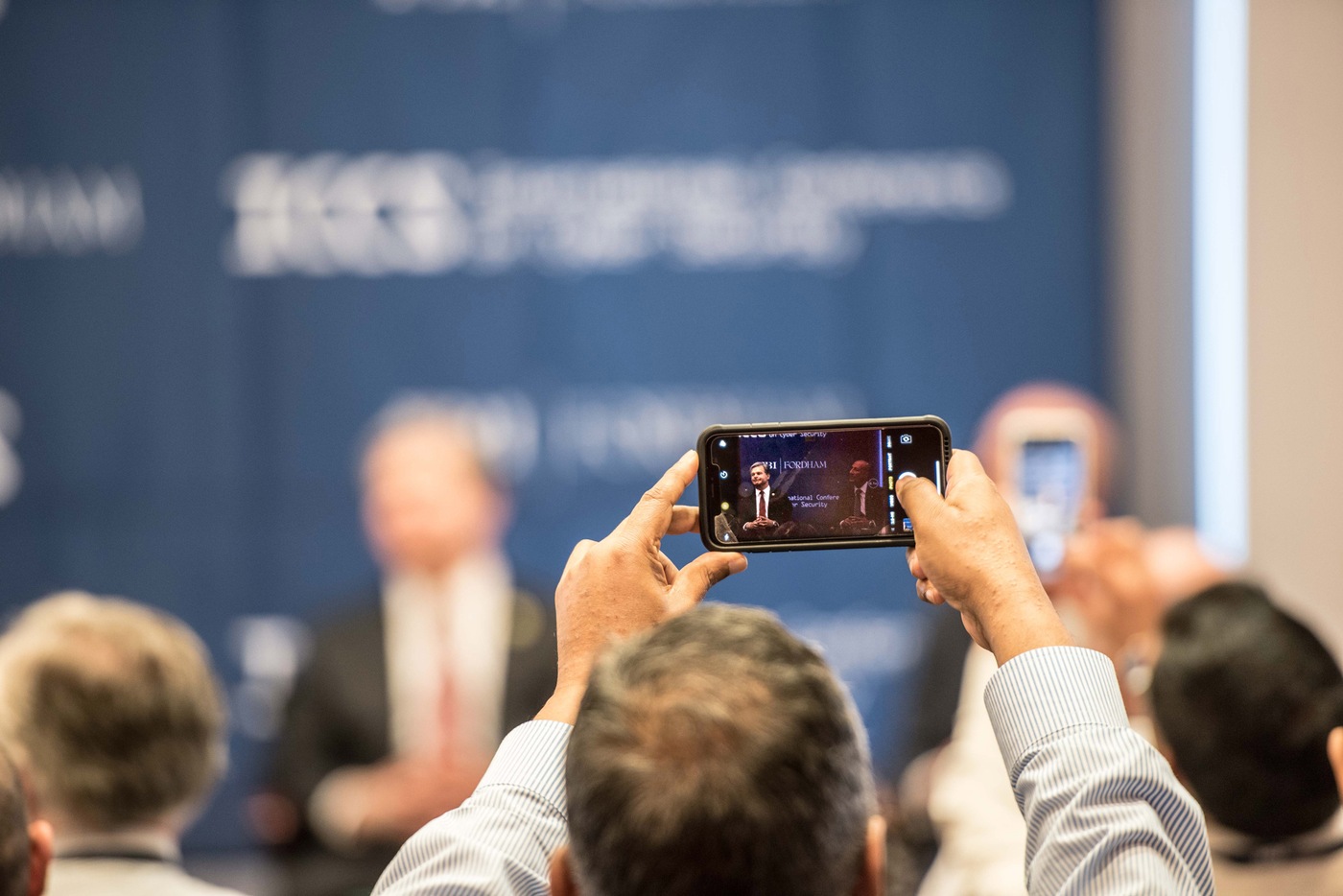 FBI Director Christopher Wray is seen through the phone of an audience member at the Fordham University/FBI-sponsored International Conference on Cyber Security in New York City on July 25, 2019.

“These threats strike—and they strike hard—at our security. That means our economic security and our ability to keep our companies safe from theft and intrusion,” Wray said. “It means our national security ... it means our safety as everyday citizens walking the streets and sending our kids to school.”

Wray served as the closing speaker at the International Conference on Cyber Security in New York, co-sponsored by the FBI and Fordham University. He was joined by Rev. Joseph McShane, president of Fordham University, and FBI New York Special Agent in Charge Aristedes Mahairas.

Wray described the many resources the FBI brings to its cyber mission—from Cyber Action Teams to the 24-hour command post known as CyWatch to the addition of cyber-focused legal attachés in FBI offices around the world.

“Our role isn’t limited to investigations,” Wray explained. We’re using our expertise to warn the public and private sectors about what we’re seeing and to spotlight risks and vulnerabilities.”

Foreign influence is one of today’s most pressing cyber-related threats, and Wray discussed the FBI’s role in mitigating these threats to the 2020 elections. Through its Foreign Influence Task Force, the FBI has foreign influence-related investigations open across the country. The Bureau’s efforts also involve building relationships with the private sector and information sharing.

“But the foreign influence threat isn’t just limited to election season,” Wray said. “We have to remain vigilant all year round. We have to raise public awareness and increase our country’s resilience in a more sustained and enduring way."

Another threat of concern to the U.S. government is foreign investment in American companies, which can sometimes lead to the theft of intellectual property, sensitive data, or proprietary research. He urged U.S. companies to exercise caution in working with companies from adversarial countries because adversaries are willing to buy access to American proprietary information.

Additionally, Wray called on the public and private sectors to work together to address the growing inability for law enforcement to lawfully access encrypted data of terrorists and criminals, sometimes referred to as “going dark.” This data may be on phones or other devices or transmitted over encrypted apps or platforms.

While the FBI supports strong cybersecurity, Wray said that no place should be completely off-limits to lawful access. He called it a “fundamental public safety issue” that hampers not only the FBI but also state and local law enforcement efforts.

Wray cited the example that nearly two years after the shooting at a church in Sutherland Springs, Texas, the FBI still cannot get into the shooter’s phone. While the gunman is dead and no longer a threat, access to that information could potentially help prevent a future attack. “If we were dealing with a living subject—someone we were still trying to track down, who could be out planning another attack—the situation could be even more dangerous,” said Wray.

This trend is made more complex by the advent of virtual currency, which some criminals use to hide their transactions.

“It cannot be a sustainable end state for us to be creating some kind of unfettered space beyond the reach of lawful access for terrorists, hackers, and child predators to hide,” Wray said. “But that’s the path we’re on now if we don’t somehow come together to find a solution.”

“The foreign influence threat isn’t just limited to election season. We have to remain vigilant all year round.”

A Tennessee attorney is spending time behind bars for stealing more than $1 million from a trust set up on behalf of the daughter of a fallen law enforcement officer.