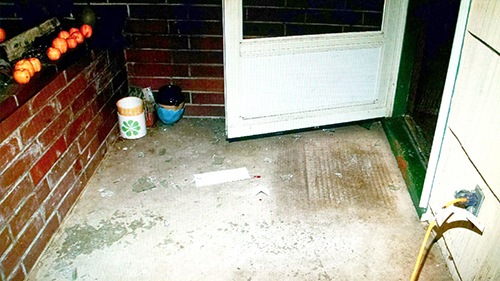 Gang members shot through the front door of a Washington couple’s house during a violent home invasion in November 2014.

Violent gangs pose a significant threat to communities throughout the United States. You don’t have to live in South Central Los Angeles or Chicago’s inner city to feel the impact of gang violence, as a recent case from Washington state illustrates.

On a Tuesday evening in November 2014, three teenagers from Seattle’s Down with the Crew Gang—a violent affiliate of the Black Gangster Disciples gang—set out from Seattle for a 50-mile drive south to the community of Lakewood. Their intention was to rob a large-scale drug house they had received information about.

Around 9:30 p.m., a 66-year-old Lakewood man answered a knock at his door and was confronted by the three youths, who forced their way into the home. The gang members had picked the wrong house, but that didn’t matter to them. What happened next was 20 minutes of terror for an innocent couple.

The gang members pistol-whipped the man until he was unconscious, tied his hands, and placed a blanket over him. They broke down a bathroom door and dragged out his 61-year-old wife, stabbed her, tied her hands, and placed her under the blanket with her husband, who was bleeding severely.

“They brutalized the couple,” said Special Agent Kelly Smith, who supervises the South Sound Gang Task Force—one of more than 160 FBI-led Safe Streets tasks forces nationwide—which handled the investigation out of the Bureau’s Seattle Division. “The level of violence and complete disregard for human life was astounding in this case,” he added.

That disregard for life became even more apparent as the home invasion continued. The robbers were in and out of the house carrying stolen items to their car when the husband regained consciousness. He was able to free himself and his wife, and with all three assailants temporarily outside, he locked the front door and the couple retreated to their bedroom, where he called 911 and retrieved his handgun.

The robbers forced their way back inside, firing a gunshot through the front door. Then they kicked down the locked bedroom door where the couple had barricaded themselves behind their bed. Confronted again by the attackers, the man fired two shots, hitting 19-year-old Taijon Vorhees both times.

At that point, all three robbers fled and drove away. And the two uninjured gang members—Duprea Wilson and Qiuordai Taylor, ages 19 and 17, respectively—decided to help themselves rather than their wounded friend.

“They didn’t want anything to do with taking him to a hospital,” said Jeff Martin, a Lakewood Police Department detective assigned to the South Sound Gang Task Force. “They drove around until he was unconscious, then dumped his body and left him to die. They basically pushed him right out of the car.”

The wounded teen did, in fact, die. The two other subjects were apprehended within 72 hours of the crime. At trial in February 2015, the two surviving defendants faced 11 state felony charges. One of the charges was manslaughter—for allowing their friend to die without seeking medical attention.

In March 2016 a jury found Wilson and Taylor guilty on all counts, and later that month a judge sentenced them each to 56 years in prison.

Smith, who has supervised the task force since 2012, credits his local, state, and federal partners, along with experienced Pierce County Prosecutor’s Office attorneys, with bringing the case to a successful conclusion.

As for the victims, Martin said they have mostly recovered from their physical injuries, but there are still emotional issues to contend with. “There are definitely lasting effects from the attack,” he said, “maybe effects that will last the rest of their lives.”

How a Tip Uncovered an International Sextortion Scheme

One tip uncovered an international cyberstalking and sextortion scheme by a State Department employee.