If there is such a thing as an ideal profession for a serial killer, it may well be as a long-haul truck driver.

FBI Crime Analyst Christie Palazzolo is quick to point out that long-haul trucking is an honorable profession and that the overwhelming majority of drivers are not murderers—but it does happen, and the pattern is unmistakable.

More than a decade ago, analysts for the FBI’s Violent Criminal Apprehension Program (ViCAP)—the only national database of serial crimes—began to see a marked increase in the number of bodies recovered along the side of the road. A majority of the victims were truck-stop prostitutes, and it turned out that many of the suspects were long-haul truckers. “We had an inordinate number of victims and offenders from this rather specific population pool,” Palazzolo explained.

To make matters worse, these cases are extremely difficult to investigate. A long-haul driver can pick up a prostitute at a truck stop in Georgia, rape and murder her, and dump her body on the side of the road in Florida later that day. The victim has no connection to the area where she was found, and there may be no forensic evidence to collect because the crime was committed hundreds of miles away. The local police detectives investigating the case might have little experience dealing with a crime of this nature and may be faced with few, if any, leads. 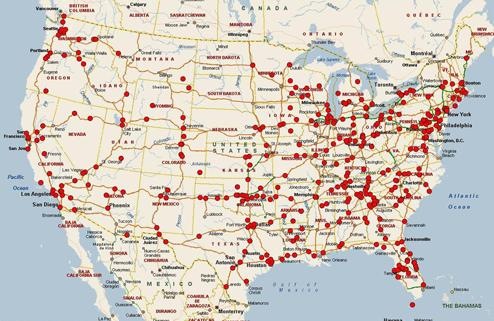 Since the Highway Serial Killings Initiative began in 2004, ViCAP analysts have compiled a list of more than 750 murder victims found along or near U.S. highways, as well as nearly 450 potential suspects.

To raise awareness among law enforcement agencies—and the public—about highway serial killings, and to focus ViCAP resources on helping to solve these cases, in 2004 the FBI began the Highway Serial Killings (HSK) Initiative, with support from the trucking industry.

“We want to help local law enforcement agencies tie their cases to similar cases nationwide,” said Palazzolo, who has been managing the initiative for the past four years. “That’s where ViCAP comes in, because the database can make those connections.”

Without ViCAP—part of the FBI’s National Center for the Analysis of Violent Crime—local law enforcement agencies investigating one of these cases may have no way of knowing a murder in their jurisdiction is similar to killings committed elsewhere. Since the initiative began, ViCAP analysts have compiled a list of more than 750 murder victims found along or near U.S. highways, as well as nearly 450 potential suspects.

The analysts also began to develop detailed timelines on many of the suspects. The information in the timelines, obtained from company logs, gas station receipts, and other records, helps investigators pinpoint where a suspect was when murders were committed.

“It’s not unusual for a driver to pass through five or even seven states in one day,” Palazzolo said. “The amount of ground they cover and the lack of any connection to where they’re passing through makes it difficult to tie cases back to them.”

So the timelines become crucial to investigations. The goal for ViCAP analysts is to obtain as many records from as many sources as possible to determine a driver’s whereabouts at fixed points in time. “Those details are what ultimately will help tie the suspect back to the murders,” Palazzolo said.

The database is constantly monitored for cases that meet the HSK criteria. When cases are identified, ViCAP analysts can provide information to local law enforcement agencies regarding these cases—anything from timeline data to advice on what records to subpoena to suggesting a point of contact at another police department with similar cases.

In the 12 years since its creation, the Highway Serial Killings Initiative has helped many local police departments solve violent sexual assaults and murder cases, but Palazzolo cautioned that many more victims demand justice. And these highly mobile killers are not going to disappear.

“According to the Department of Transportation,” she said, “the number of truck drivers on the road in the next 20 years is going to grow exponentially. So if we’ve already identified a population from which we are getting a significant number of offenders, and if we are going to be seeing more and more trucks on the road, the potential for additional highway serial killings is definitely there."

A recent case serves as a reminder of the threat posed by pedophiles online.