John Bills once held a position of trust as Chicago’s assistant transportation commissioner. Now the 55-year-old is serving a 10-year prison sentence for his role in a long-running corruption scheme involving the city’s red-light camera contracts.

“Chicago has a well-known history of public corruption,” said Special Agent Brian Etchell, “but even by Chicago’s standards, this case stands out.”

That’s because the corruption went on for nearly a decade, and “the sheer amount of cash bribes to Bills—more than $600,000—was stunning,” said Etchell, who investigated the case with Special Agent Craig Henderson from the FBI’s Chicago Division. Henderson noted that the corruption scheme involved payments and perks that totaled more than $2 million.

From the time Redflex received the contract in 2003 until Bills retired in 2011, evidence showed that the transportation official used his influence to expand Redflex’s business in Chicago. That resulted in millions of dollars in contracts for the installation of hundreds of red-light cameras. Redflex was enriched—and the company made sure Bills was as well.

The company gave Bills cash, expensive meals, golf outings, airline tickets, hotel rooms, and more. Some of the benefits were given to him directly, while hundreds of thousands of dollars in cash was funneled to Bills through his friend Martin O’Malley, whom Redflex hired to facilitate the payoffs.

As a Redflex contractor, O’Malley was paid lavish bonuses as new cameras continued to be added in the city. O’Malley, in turn, stuffed envelopes full of his bonus cash and gave them to Bills, often during meals in Chicago restaurants. O’Malley also used some of the money to buy and maintain a condo in Arizona that Bills used as his own.

Bills had more cash than he knew what to do with. “He would ask co-workers to purchase airfare tickets on their credit cards,” Henderson said, “and then he would repay them on the spot in cash. He had his friends write him personal checks, and then he would immediately give them cash—he would just hand over $3,000 right there.” 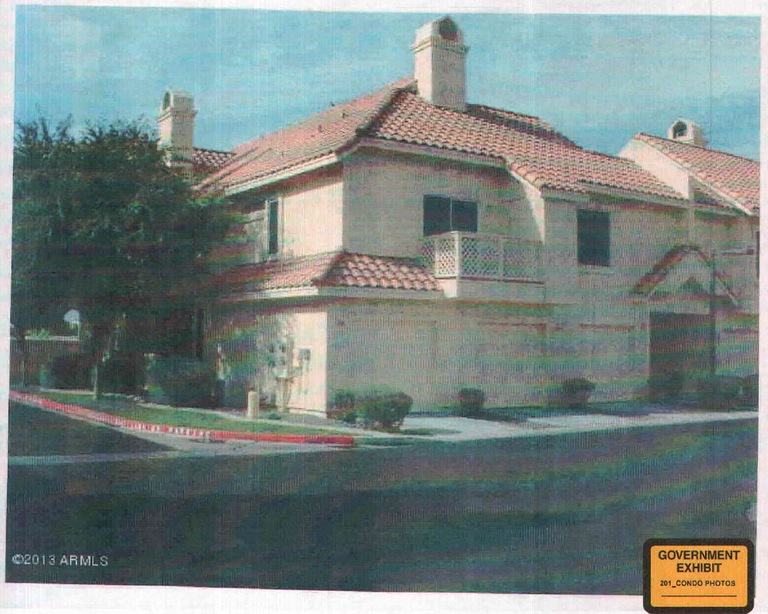 While he was an influential official with Chicago's Department of Transportation, John Bills took hundreds of thousands of dollars in bribes from an Arizona company that was contracted to provide the city with red-light cameras. Through a middleman, the company provided Bills with the use of a luxury condominium in Arizona, shown here in an exhibit presented at his trial.

When a Redflex employee alleged misconduct regarding how Chicago’s red-light camera business was being conducted, the company did an internal investigation and found nothing wrong. Later, after a newspaper exposé raised questions about the relationship between Redflex, O’Malley, and Bills, the company began another inquiry, and information from that investigation was presented to the FBI and the United States Attorney’s Office.

“Based on the company's investigation, we opened a case starting in 2013,” Etchell said. “We were able to establish a direct link between O’Malley, Bills, and the Arizona condominium. The majority of the bribes were flowing through Redflex to O’Malley to that condominium.”

Even so, “much of the evidence was still circumstantial,” Henderson said. So the investigators interviewed countless individuals, many of whom worked with Bills and at Redflex. In 2014, O’Malley was arrested. Faced with the mounting evidence against him, he began cooperating with the investigation and laid out the entire scheme.

“He was the middleman, the bagman,” Etchell said, “and he decided to cooperate with us.” Bills was indicted in 2014. In January 2016, a federal jury convicted Bills on all counts against him, among them mail fraud, wire fraud, bribery, and filing false tax returns. He was sentenced in August 2016. A month later, O’Malley, 75 and in frail health, received a six-month prison term.

“I would like to think that with each of these investigations, we chip away, piece by piece, at this culture of corruption.”

Karen Finley, a former CEO of Redflex, pleaded guilty in 2015 to one count of conspiracy to commit bribery in the red-light camera corruption scheme. She awaits sentencing.

Henderson thanked the FBI’s law enforcement partners—the Internal Revenue Service, the City of Chicago Office of Inspector General, and the U.S. Attorney’s Office—for making “large contributions to the case.” He added, “I would like to think that with each of these investigations, we chip away, piece by piece, at this culture of corruption.”

A group of friends who referred to themselves as the Jedi Knights committed several hundred home break-ins up and down the East Coast during 2011 and 2012.

A Primer on DarkNet Marketplaces

The DarkNet provides anonymity to criminals who set up online marketplaces for nefarious purposes, but the FBI and its partners are working to disrupt the operations and infrastructure of these illicit sites.