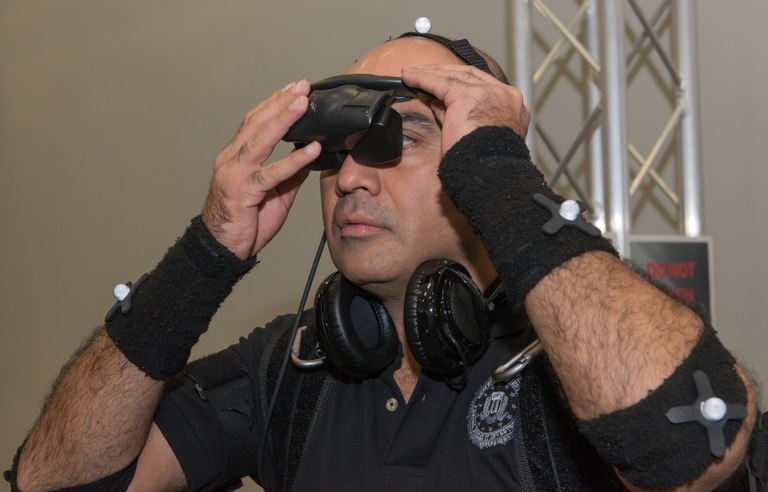 CACIE participants use the FBI’s state-of-the-art simulation trainer in Quantico, Virginia to hone their tactical skills.

Wearing special headsets and sensors that transported them into a virtual world, the Central American Community Impact Exchange (CACIE) participants prepared to do battle in the FBI’s simulation trainer. The armed criminals projected through their 3D goggles lurked behind furniture and doorways. Carrying real M4 rifles customized to shoot virtual rounds, it was the team’s job to subdue the bad guys without becoming casualties themselves.

The state-of-the-art simulation trainer at our facility in Quantico, Virginia helps new FBI agents-in-training and police officers around the country hone their tactical skills. For the CACIE group—many of whom are not members of law enforcement—the simulator was an illuminating and sobering lesson in how dangerous a police officer’s job is and how crucial teamwork is to success.

“Until today,” said a community activist from Honduras who had just emerged from a training run in the simulator, “I had never held or fired a weapon in my life.” Unfortunately, transnational gangs such as MS-13 and 18th Street use guns far too often for crimes and murders in her country and elsewhere in Central America.

One of CACIE’s primary goals is to bring law enforcement and community groups together to develop programs that keep youths from being recruited by gangs. “The idea is to provide young people with other opportunities,” said Special Agent Rich Baer, a member of the FBI’s Safe Streets and Gang Unit who helps administer the CACIE program.

For that concept to work, the 22 CACIE participants from Honduras, Guatemala, El Salvador, Belize, Costa Rica, Panama, and the U.S must develop strong relationships so that when the two-week class is completed, lasting partnerships can be formed.

“All the people here need to become close friends during this experience,” said Gerry Lopez, a senior deputy district attorney in Riverside, California, who participated in the first CACIE training session last year and was invited back to share best practices with this year’s class. “Before there can be an effective professional connection,” he said, “there needs to be a meaningful personal connection.”

That’s why the team-building exercise in the virtual trainer—along with other classroom, tactical, and field training the group received—is vital. Learning how officers search buildings and make arrests gave the non-law enforcement members of CACIE an appreciation for what police are up against when dealing with violent gang members. It also underscored the fact that the fight against transnational gangs—regardless of one’s nationality—can only succeed through a unified effort.

“The hope is that after this training, the participants will take an elevated role against gangs in their communities,” Baer said, “and share with each other what works and what doesn’t work.”

“It’s good to know there are so many other people in different countries committed to keeping kids out of gangs,” said CACIE class member Fredy Martinez, a mental health therapist and court liaison with Arlington, Virginia’s Department of Human Services who counsels young gang members caught up in the legal system. “This group—and what they stand for—validates what I do on a daily basis.”

CACIE participant Henry Pacheco, a counselor for the Northern Virginia Family Service’s Intervention, Prevention, and Education Program, acknowledged that the gang problem can sometimes seem overwhelming. “But there is hope,” he said. “Just take a look at the people in this group. They all care, and they are all working together to make their communities better.”

Next: Overcoming the language barrier.

This year’s CACIE class, like last year’s inaugural group, was chosen because they are passionate about making their communities safe from violent gangs and are actively working to achieve that goal.

U.S. participants were drawn largely from the FBI’s 163 Safe Streets Task Forces located around the country, which are composed of FBI agents and local, state, and other federal law enforcement personnel.

In Central America, the Bureau relies on the United States Agency for International Development (USAID) to help select participants for the CACIE program. USAID is the government agency responsible for providing economic, development, and humanitarian assistance around the world in support of U.S. foreign policy goals while helping democratic countries realize their potential.

Part three of series shows the integral role our linguists play in the CACIE training.