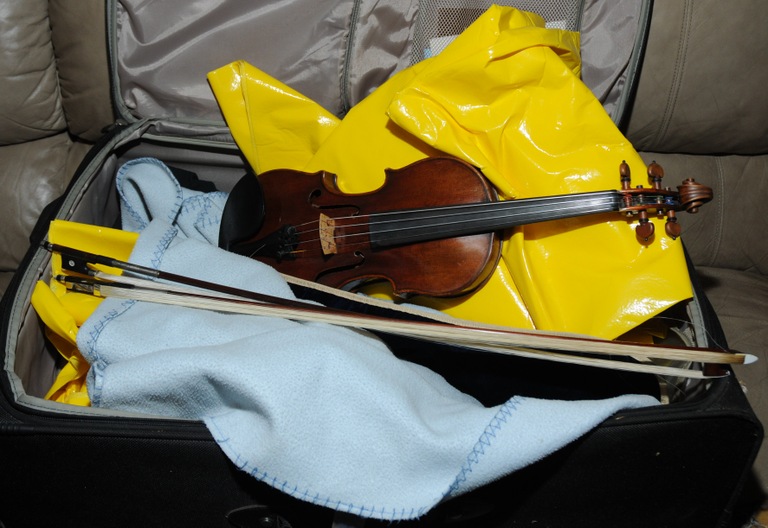 The Lipinsky Stradivarius, shown here shortly after recovery, is 300 years old and valued at more than $5 million.

When a 300-year-old Stradivarius violin valued at more than $5 million was stolen from Milwaukee Symphony Orchestra concertmaster Frank Almond last year, investigators initially believed the theft may have been the work of sophisticated art thieves. The truth turned out to be much less glamorous.

Still, the tale of the theft and recovery of this rare instrument goes down in the annals of the FBI’s Art Crime Team as a one-of-a-kind case.

When Almond emerged from a back door of a concert hall at Wisconsin Lutheran College last January, where he had just performed, he was carrying the “Lipinski Strad”—made by Antonio Stradivari in 1715 and later named for the Polish violinist Karol Lipinski who played it. As Almond walked to his car, a man approached, pulled a Taser from his coat, and fired. With Almond temporarily incapacitated by the stun gun, the thief grabbed the Lipinski and fled to a waiting vehicle. Hours later, Milwaukee Police Department officers found the violin case discarded by the side of the road.

“There was an automatic assumption the violin would be traveling interstate and then most likely overseas,” said Special Agent Dave Bass, a member of the Art Crime Team in the Bureau’s Milwaukee Division.

Aware of the cultural significance of the violin—and that time was of the essence—the Milwaukee Police Department swiftly marshaled its forces and requested the FBI’s assistance tracking down possible leads outside Wisconsin. Special Agents Tim Bisswurm and Brian Due began gathering information about the weapon used in the robbery, which led to one of the big breaks in the case.

Using evidence found at the crime scene, agents were able in a few days to trace the weapon from the manufacturer to the purchaser—a Milwaukee barber named Universal Knowledge Allah.

At the same time, with the investigation in high gear and a $100,000 reward available, police received a tip regarding Milwaukee resident Salah Salahaydn. A week after the robbery, Allah and Salahaydn were arrested and charged locally, but the violin and two valuable bows were still missing.

“One of my big concerns was how the violin was being stored,” Bass said. Because the delicate instrument might be critically harmed by extreme cold or humidity, Bass and others were worried that it might be irreparably damaged.

Nine days after the robbery, Salahaydn led investigators to a Milwaukee home. With a borrowed ladder from the SWAT team, Bass climbed through a crawl space into the attic and retrieved the violin and the bows wrapped in a baby blanket inside an old suitcase.

“I am by no means a violin expert,” Bass said, “but because of our training, I could make an informed opinion that in fact it was the Lipinski. And it appeared to be in great shape.” 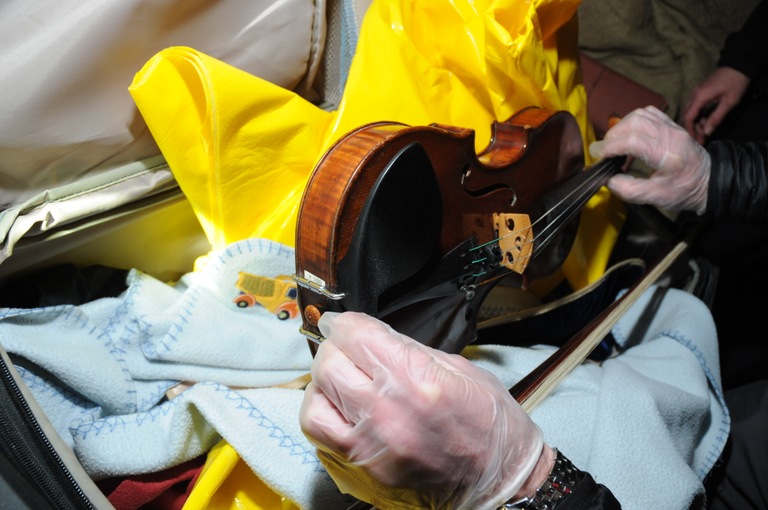 In May 2014, Allah pleaded guilty to felony robbery for his role in providing the stun gun to Salahaydn. He is currently serving a three-and-a-half-year prison term. Last November, Salahaydn was sentenced to seven years in prison after earlier pleading guilty to the theft.

“My opinion is that the robbery was all about the reward money,” Bass said. “I believe Salahaydn’s intention was never to sell the violin. There are only a handful of people in the entire world who could do that, and he’s not one of them.”

And nearly two decades earlier, Salahaydn was linked to a Milwaukee art theft and was later convicted of receiving stolen property after he tried to sell the stolen $25,000 sculpture back to the gallery years after the crime.

In the end, Bass said, the Stradivarius robbery scheme was anything but sophisticated. The Taser was only good for one shot, and on a winter night when people wear heavy coats, it was more luck than skill that the weapon found its mark. Still, Salahaydn conducted extensive surveillance on Almond and knew where he and his family lived. The crime was clearly premeditated.

Almond, who has been playing the Lipinski since 2008—on loan from an anonymous donor—was thrilled to get the violin back. “This was a fairly violent and traumatic event for me and my family,” he said recently. “But there were silver linings as well, in large part because of the unbelievable police work and cooperation between the Milwaukee Police Department and the FBI. I will be indebted to all of them for the rest of my life.”

When the violin was stolen, Almond said, “the community really came together and saw what kind of cultural treasure was in their midst.” Now, with all the publicity surrounding the case—and as the Lipinski celebrates its 300th birthday this year—he explained, “people want to hear the violin. There’s an interest in hearing the violin played live, and not just locally.”

Almond showed his gratitude last month to investigators who solved the case by taking part in a presentation at the FBI’s Milwaukee headquarters and playing the Lipinski for members of the Bureau, an FBI Citizens Academy group, and special guests from the Milwaukee Police Department.

Bass, a 10-year veteran of the Art Crime Team, explained that the Bureau worked “hand in hand” with the police department to support their case and added that he has never seen an armed robbery of an instrument of this value. “There are plenty of examples of theft—breaking into a practice room, or the musician accidentally leaves the instrument somewhere—but there has never been an instance I know of where someone walks up to one of these world-class musicians and forcibly takes an instrument. We hope that it never happens again.”

Director Comey discussed the Bureau’s current priorities as well as collective issues facing the law enforcement community as a whole.