Coordination Among Agencies is Key 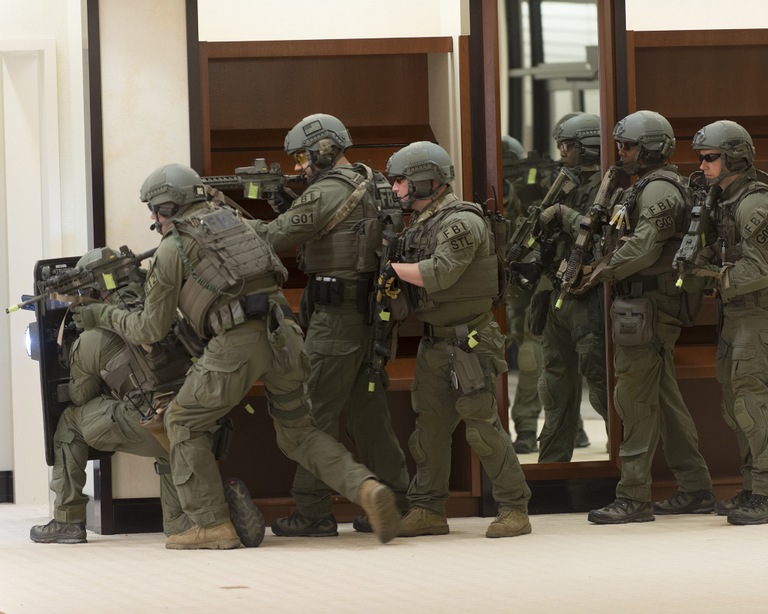 The FBI Dallas office held its own field training exercise on May 1, 2014, with its federal, state, and local law enforcement and private sector partners collaborating to respond to an attack scenario at a local mall. Above, members of the Dallas FBI SWAT team are seen setting up their perimeter inside the mall as they search for attackers and look to rescue shoppers and mall employees hiding inside.

Not long after, the Bureau—in partnership with the Department of Homeland Security (DHS)—formulated plans for a training exercise series to ensure that American law enforcement, other public safety first responders, and private sector entities had coordinated, effective response plans in place in case this type of complex terror attack ever occurs at a U.S. public venue.

These exercises aren’t in response to any current threat but are simply part of our continuing mission to share information and work with public safety and private sector partners to improve overall threat response capabilities.

The first two phases of this training series took place last fall. Tabletop exercises were held with FBI field office personnel; federal, state, and local public safety officials; and private sector partners—including mall managers and owners—to discuss a hypothetical terror attack on a local mall and gain a clearer understanding of each other’s capabilities and responsibilities. A second exercise was more inwardly focused, concentrating on FBI field office response plans and the effectiveness of our capabilities to communicate vital information to our own personnel and external partners.

Lessons learned from Phases I and II were integrated into the third phase of the training, which is actually occurring now and over the next couple of weeks. During Phase III, FBI field offices—with DHS—are hosting a boots-on-the-ground exercise with regional federal, state, and local public and private sector partners at shopping malls outside of regular business hours.

This exercise scenario, like the first two phases, involves a simulated terrorist incident with numerous attacks, improvised explosive devices, and multiple victims and witnesses. Participants gather to discuss what’s about to happen, run through the exercise, and finish up by reflecting on what worked and what didn’t. After the several-hour exercise and the formal after-action review, participants will take the lessons learned and modify their own agency’s response plans as needed to ensure they mesh with those of other agencies.

A few FBI offices have already conducted their Phase III training and can attest to its value.

For example, Monica Miller, special agent in charge of our Sacramento Division, said that her office’s exercise “ensures unity and strategic collaboration among federal agencies, first responders, and private sector partners during a crisis” and also offered the opportunity to “make improvements well in advance of a real-world incident.”

Also supportive was the general manager of the mall where the Sacramento exercise took place. “We take our participation in training exercises such as this one seriously,” Eddie Ollmann explained, “because we know they help prepare our community to respond to potential emergency situations.”

So far, all of this training has been regionally based. Later this year, the FBI will host a capstone exercise to incorporate national assets and resources into the mix in the event of a public venue attack with broader implications.

Subscribe to our email newsletter for news on the FBI, sent out every week.

A large-scale fraud ring charge millions of dollars on credit cards they had no intention of paying off—the leader was sentenced to 12 years in prison.