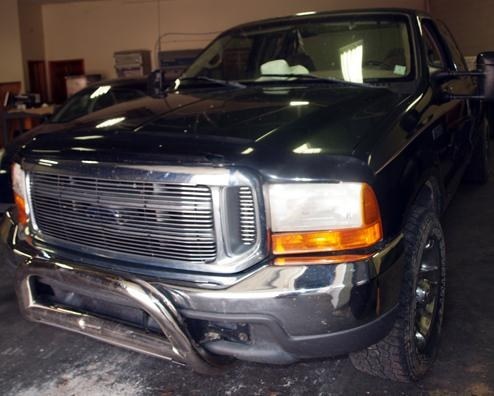 Shown is the pickup truck that was used to run over and kill James Craig Anderson. After the resulting federal hate crimes investigation into Anderson’s death and a number of related criminal incidents, the driver of the truck was sentenced to 50 years in federal prison.

In Jackson, Mississippi, in the early morning hours of June 26, 2011, a 47-year-old African-American man—James Craig Anderson—was severely beaten and then intentionally run over with a pickup truck in an unprovoked attack by a group of white teenagers from nearby suburbs. Some of the teens yelled racial epithets during this horrific incident, a random act of hate crime violence that resulted in Anderson’s death.

The FBI’s Jackson Field Office opened an investigation, and it wasn’t long before we were able to piece together a conspiracy among at least 10 individuals who—on a half-dozen or so different occasions—made and carried out plans to target, harass, and hurt African-Americans in Jackson, specifically those they believed were homeless or under the influence of alcohol because they thought that such individuals would be less likely to report the assault.

All 10 were eventually charged with federal hate crimes. And all 10 have pled guilty and were sentenced to federal prison terms ranging from four years to 50 years. The 50-year term went to Deryl Paul Dedmon, the pickup truck driver who ran over Anderson. Dedmon was also charged in state court with murder and received two life sentences.

These hate crime incidents, which began in the spring of 2011 and occurred while the subjects were driving through Jackson—often after an evening of partying—culminated in the June 2011 death of Anderson, an auto plant worker.

Several of the subjects saw Anderson alone in the parking lot of a Jackson hotel. They stopped their vehicle and—after using cell phones to contact several other subjects who were nearby in another vehicle—got out of the car to distract their victim until their co-conspirators arrived. Once the second vehicle arrived, one individual struck Anderson in the face, knocking him to the ground. A second individual straddled the victim and struck him repeatedly in the face and head with a closed fist. Leaving Anderson lying there, they got back into their vehicles and, urged on by two of the female subjects and yelling a racial epithet, Dedmon ran over the victim on his way out of the parking lot.

Among the other hate crime incidents the subjects were charged with:

After Anderson’s death, FBI personnel from the Jackson Field Office formed an investigative team with prosecutors from the U.S. Attorney’s Office for the Southern District of Mississippi, the Department of Justice’s Civil Rights Division, and a Special Assistant U.S. Attorney appointed from the Hinds County District Attorney’s Office. The extensive investigation involved hundreds of interviews, the execution of search warrants, search and evidence collection by the FBI Evidence Response team, video forensic analysis by the FBI Laboratory, cell phone examinations by the FBI Computer Analysis Response Team, and analysis of telephone records.

Tragically, one of our law enforcement partners in this investigation—Jackson Police Department Detective Eric Smith—was shot and killed by a murder suspect in an unrelated April 2013 incident. Detective Smith was able to uncover a great deal of information in this case in a very short period of time, and his work formed a solid basis for the start of the federal investigation.

Hate crimes have a devastating impact on communities, which is why the FBI remains committed to working with our state and local partners—with the help of the public—to bring to justice those who perpetrate them.

Seeking information about the murder of Theresa Dashewich.