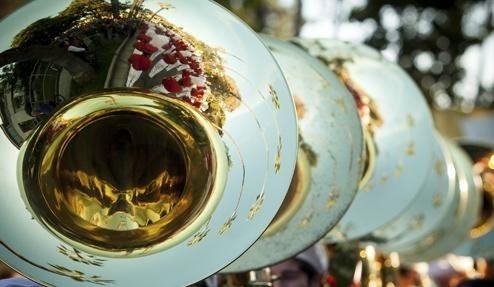 The trip to Hawaii for 270 high school band members and their chaperones was supposed to be the crescendo of months of performances, fundraisers, and saving to book the arrangements. But the music stopped when the band’s travel agent admitted he’d duped them to the tune of more than $272,000.

In August 2011, a high school band in Arkansas contracted with Utah-based travel agent Calliope R. Saaga to arrange the once-in-a-lifetime trip. The school wired the funds in multiple installments, but rather than booking the band’s Hawaii excursion, Saaga spent the money himself—on his own trips to Disneyland, Samoa, and Las Vegas—all the while offering assurances the band’s trip was on schedule. It wasn’t until Saaga stopped answering calls after the last payment in February 2012 that school officials got suspicious. Soon after, just months before their scheduled departure, Saaga admitted he’d lost all their money.

“I made some terrible decisions with the money,” Saaga said in a 2012 e-mail to the band’s assistant director, who had booked two trips previously with Saaga so was shocked by the turn of events.

“They thought they had someone they could trust,” said Special Agent Tim Akins of the FBI’s Little Rock Division, which opened a wire fraud case against Saaga. “Now all of a sudden they don’t have money to go anymore.”

It got worse. During Akins’ investigation, he learned that the FBI’s Kansas City Division had opened its own case on Saaga after a Missouri high school said the travel agent had bilked its band boosters out of more than $360,000 for a Hawaii trip. The Bureau’s Springfield (Missouri) Division was also looking into Saaga. Then emerged still another scheme by Saaga to cheat an Arkansas school district. Forensic accounting in the Kansas City case showed Saaga spent at least 47 days gambling in Las Vegas when he should have been booking the schools’ outings.

“Saaga is a thief who stole from hard-working citizens and their children,” said FBI Little Rock Special Agent in Charge David T. Resch.

During the course of the investigation, Saaga fled to Samoa, where he is from. In his e-mail admission to the band director, he said he was trying to sell his assets there to repay the group. “It will be a slow process so I beg of your patience,” he wrote.

Parents who had been duped hoped Saaga would face justice and expressed frustration on social media. In a May 2012 message on a Samoa news outlet’s Facebook page, the mother of a band member said families had worked hard to fund their summer trip. “Some of the kids took on part time jobs to pay for this trip,” the mother said, “others even borrowed money from the bank.”

Saaga ultimately returned to the U.S. to face multiple wire fraud and money laundering charges for schemes that resulted in more than $700,000 in losses. He was indicted in May 2014. Among his scams:

Saaga was sentenced March 12 to five years in federal prison in the Willard High school case. On March 31, he was sentenced to 63 months for swindling Southside High School’s band. The sentences are to run concurrently. He was also ordered to pay $780,000 in restitution.

Leader of advance fee and investment scams sentenced for swindling millions from investors.