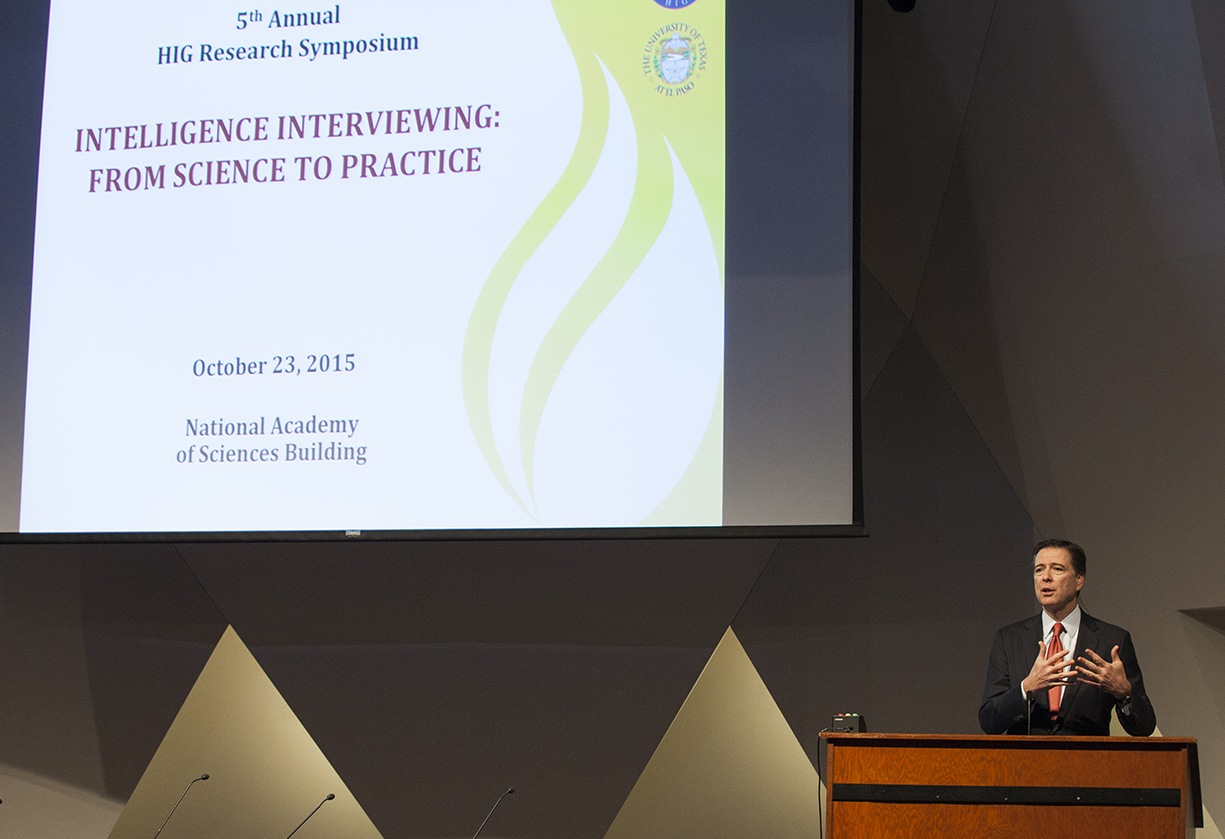 “The rule of law in the Constitution is our spine, it’s who we are, it’s part of our fiber ... and we want humane, effective, lawful encounters with every human being.”

Those words were spoken last week by FBI Director James Comey as he was discussing the efforts of the U.S. government’s High-Value Detainee Interrogation Group (HIG) during the HIG’s fifth annual research symposium, held October 23 at the National Academy of Sciences in Washington, D.C.

Comey, who briefed symposium participants on the evolving terror threat, also said that the HIG’s work “is valuable beyond national security cases” and that the group’s research and training efforts benefit law enforcement interviewers as well.

The HIG, established in 2009, brings together personnel from the U.S. Intelligence Community to conduct interrogations that strengthen national security and that are consistent with the rule of law. But in addition to its operational role in eliciting accurate and actionable intelligence from high-value terrorism subjects, the HIG plays another vital role as well—serving as the government’s focal point for interrogation best practices, training, and scientific research. And during its yearly research symposium—coordinated by the Center for Law & Human Behavior at the University of Texas at El Paso—scientists from the U.S. and abroad who work with the HIG have the opportunity to share with policy makers and intelligence professionals ground-breaking research that can impact the effectiveness of interview and interrogation methods.

All HIG-sponsored research is unclassified—researchers who work with the HIG are free to publish their findings, and most do. At this year’s symposium, participants presented research on topics like the dynamic nature of interrogations, the challenges of interviewing through interpreters, the use of rapport rather than tough tactics, negotiations across cultures, subtle elicitation approaches, and priming disclosure and cooperation.

Background on the HIG: The director of the HIG is an FBI representative and is assisted by two deputies—one from the Department of Defense and the other from the Central Intelligence Agency. Full-time HIG members are augmented part-time by HIG-trained professionals from FBI field offices and other U.S. Intelligence Community agencies.

HIG responsibilities fall under three primary areas, all of which feed into one another:

Has the HIG been effective? According to HIG Director Frazier Thompson, “Much of our operational work is necessarily classified, but I can tell you this—as a result of the HIG, plots to harm the U.S. and its allies have been disrupted, dangerous people have been put behind bars, and gaps in U.S. intelligence collection have been bridged.”

The Truth About the HIG

There are several misconceptions about the High-Value Detainee Interrogation Group (HIG) that we’d like to clear up. Here is the truth:

Cyber Tip: Social Media and the Use of Personal Information

This week’s FBI cyber tip is on the risks of posting personal information to social networking sites and how users can minimize those risks.

Director Comey continues efforts to further the discussion on race and law enforcement.