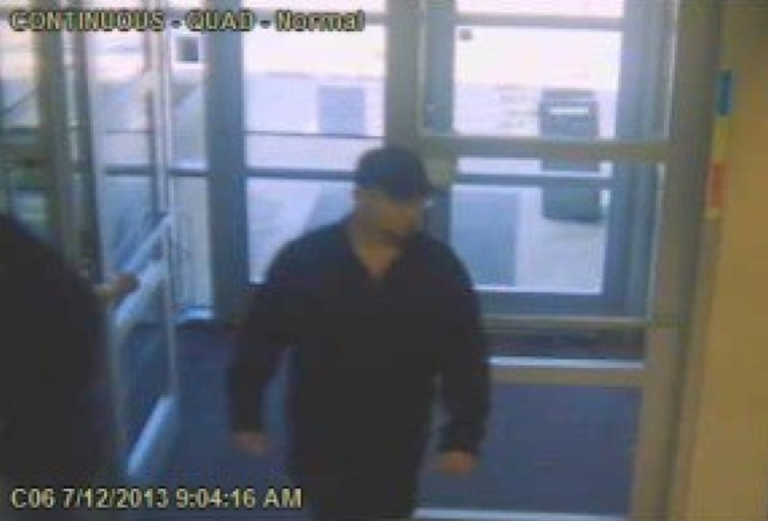 Over the past four years, a man authorities have dubbed the Loan Ranger Bandit has committed at least a dozen armed robberies of banks and other financial institutions in four different states—and he is so brazen he doesn’t bother covering his face.

“We have a lot of good surveillance photos where he is looking directly at the camera,” said Special Agent Russell Di Lisi, who is coordinating the investigation from our Dallas Division. “Somebody out there has to know him or recognize him, and that’s why we need the public’s help.”

A reward of up to $10,000 is being offered for information leading to the identification, arrest, and conviction of the Loan Ranger Bandit. Beginning in 2009, he has robbed banks in Arkansas, Mississippi, Kentucky, and Texas. His most recent robbery was last month in Temple, Texas at the Santa Fe Community Credit Union—the second time he has targeted that institution.

“He is a lot more reckless now,” said Di Lisi, explaining that in the early robberies, the bandit would give tellers a demand note and show them a weapon in his waistband. “Beginning with the ninth robbery and every one since then,” Di Lisi said, “he has actually brandished the weapon.”

Officials with the Tyler Police Department in Texas came up with the Loan Ranger Bandit’s moniker because the robber is known to target financial institutions that make loans, and he wore a Texas Rangers baseball cap in one of his first robberies.

“He usually wears different hats,” Di Lisi said, “but he makes no effort to cover his face.” Di Lisi noted that despite his lack of a disguise, the Loan Ranger Bandit is clever. He picks stand-alone institutions that offer easy access to major roadways—and therefore quick getaways—and he often targets the same banks more than once. “He’s very confident in what he’s doing,” Di Lisi said. “I believe he’s going to keep hitting banks until we catch him.”

The bandit is described as a white male in his early 30s, approximately 5′7″ to 6′ tall, about 200 pounds, with a medium build. He has short, light brown hair, wears glasses, and has a small mole or mark just above his right eye on the lower part of his forehead. His varied clothing styles have included athletic wear, jeans, and business attire. He may also drive a maroon Chevrolet S-10 pickup truck with a white pinstripe around the truck bed. He should be considered armed and dangerous and should not be approached.

More information about the Loan Ranger Bandit, along with a number of detailed surveillance pictures, can be viewed on bankrobbers.fbi.gov, the Bureau’s national website that features wanted bank robbers (see sidebar).

We need your help: If you have any information about the Loan Ranger Bandit, contact your local FBI office, submit a tip online, or call 1-800-CALL-FBI. Any information, even if it seems small, may be the connection we need to solve these crimes—and make you eligible for the $10,000 reward.

“It’s been almost four years, and he’s still out there,” Di Lisi said. “With the public’s help, we need to catch this guy before he strikes again.”

In December 2012, the FBI launched the Wanted Bank Robbers website, the first national system of its kind designed to help law enforcement—with the aid of the public—solve our most pressing bank robbery cases.

The site, which contains more than 200 wanted bank robbers from across the country, features a gallery of unknown suspects and a map function that plots robbery locations. Users can search by name, location, or other factors. Search results deliver a Wanted by the FBI poster that contains more images, a suspect’s full description, and a brief narrative of the crime.

Displaying all this information in one place makes it easier for the public to recognize potential subjects, draw connections between robberies in different places, and contact law enforcement with information.

New Jersey man defrauded an order of nuns and others out of more than $1 million.

Legal Attache situation in Manila, then and now.