Map and timeline of incidents in the Potomac River Rapist investigation. 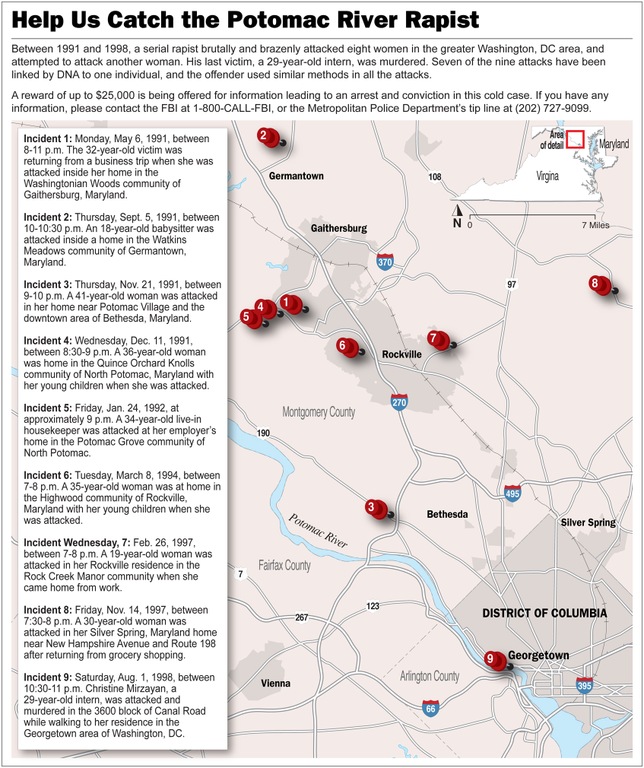 Between 1991 and 1998, a serial rapist brutally and brazenly attacked 10 women in the greater Washington, D.C. area. His last victim, a 29-year-old intern, was murdered. Eight of the 10 attacks have been linked by DNA to one individual, and the offender used similar methods in all the attacks.

A reward of up to $25,000 is being offered for information leading to an arrest and conviction in this cold case. Law enforcement agencies are asking anyone with information to contact Washington’s Metropolitan Police Department at (202) 727-9099 or the FBI at 1-800-CALL-FBI (1-800-225-5324). Additionally, anonymous information may be submitted to the police department’s TEXT TIP LINE by text messaging 50411. You can also submit a tip at tips.fbi.gov.

Incident 1: Monday, May 6, 1991, between 8-11 p.m. The 32-year-old victim was returning from a business trip when she was attacked inside her home in the Washingtonian Woods community of Gaithersburg, Maryland.

Incident 4: Wednesday, Dec. 11, 1991, between 8:30-9 p.m. A 36-year-old woman was home in the Quince Orchard Knolls community of North Potomac, Maryland with her young children when she was attacked.

Incident 5: Friday, Jan. 24, 1992, at approximately 9 p.m. A 34-year-old live-in housekeeper was attacked at her employer’s home in the Potomac Grove community of North Potomac.

Incident 6: Tuesday, March 8, 1994, between 7-8 p.m. A 35-year-old woman was at home in the Highwood community of Rockville, Maryland with her young children when she was attacked.

Incident 8: Wednesday, Feb. 26, 1997, between 7-8 p.m. A 19-year-old woman was attacked in her Rockville residence in the Rock Creek Manor community when she came home from work.

Incident 9: Friday, Nov. 14, 1997, between 7:30-8 p.m. A 30-year-old woman was attacked in her Silver Spring, Maryland home near New Hampshire Avenue and Route 198 after returning from grocery shopping. 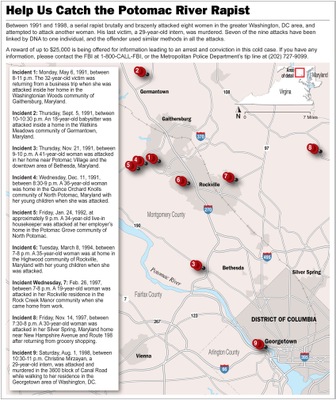