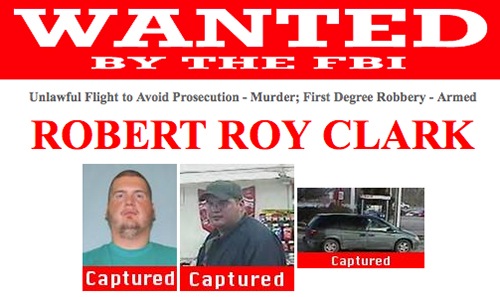 2/5/15 Update: Robert Roy Clark, Tabatha Marie Hazel, and Jeffrey P. Caley, Jr. were all taken into custody this morning in Arizona without incident.

The FBI is offering a $20,000 reward for information leading to the arrest of Robert Roy Clark, who was charged with murdering an elderly Ohio couple and is also wanted for his alleged involvement in a string of armed robberies. Clark is believed to be traveling in the company of two individuals—Jeffrey P. Caley, Jr. and Tabatha Marie Hazel—and all were last seen in a green Dodge Caravan with Ohio plates.

After an elderly couple was reported missing on January 22, 2015 in Strasburg, Ohio, police found their home had been ransacked, with lock boxes pried open and telephone lines cut; their car was also gone. Their burned-out vehicle was found later that same day in nearby Coshocton County, and skeletal remains—later identified as the bodies of the missing—were recovered from inside the car. On January 31, Clark was charged by Coshocton authorities with the murder of the couple, but he allegedly fled his residence with Caley and Hazel before he could be arrested. A federal arrest warrant was issued on February 3, 2015, after Clark was charged with unlawful flight to avoid prosecution.

Since then, Clark, Caley, and Hazel have allegedly taken part in a number of armed robberies in West Virginia and South Carolina. All three—who have been identified in surveillance video at the robberies and have displayed a sawed-off shotgun and a pistol—should be considered dangerous.

If you have any information concerning any of these individuals, please call 1-800-CALL FBI (225-5324) or contact your local FBI field office or nearest American Embassy or Consulate.

The case of a scientist and his wife who sold some of our nation’s nuclear secrets.