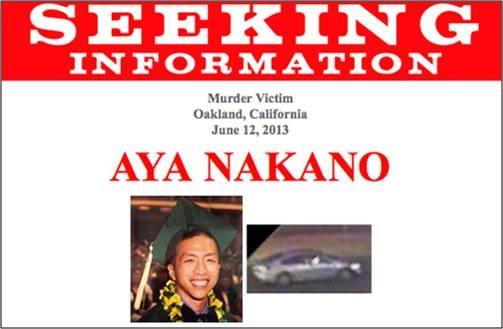 The FBI is offering a substantial reward for information leading to arrests and prosecutions in the 2013 murder of Aya Nakano, who was gunned down an hour before his 23rd birthday after a traffic incident in Oakland, California.

During a press conference today, the FBI announced a reward of up to $25,000, which is in addition to a separate significant reward offered by Nakano’s family. The FBI and the Oakland Police Department are asking for the public’s help to identify the two individuals responsible for the murder that occurred around 11 p.m. on June 12, 2013.

Nakano was driving home to Emeryville, California, when his car was involved in a minor accident with a silver, four-door sedan with tinted windows. The accident occurred at the intersection of Stanford Avenue and Market Street. After the accident, Nakano pulled over near the intersection, as did the sedan. Two suspects emerged from the vehicle and fatally shot Nakano before driving away.

Anyone with information regarding the case should contact the Oakland Police Department at (510) 238-7950, their local FBI office, or the nearest American Embassy or Consulate.

Members of the Lucchese crime family were recently sentenced to lengthy prison terms.