More Than 2 Million Seniors Victimized in Past Year 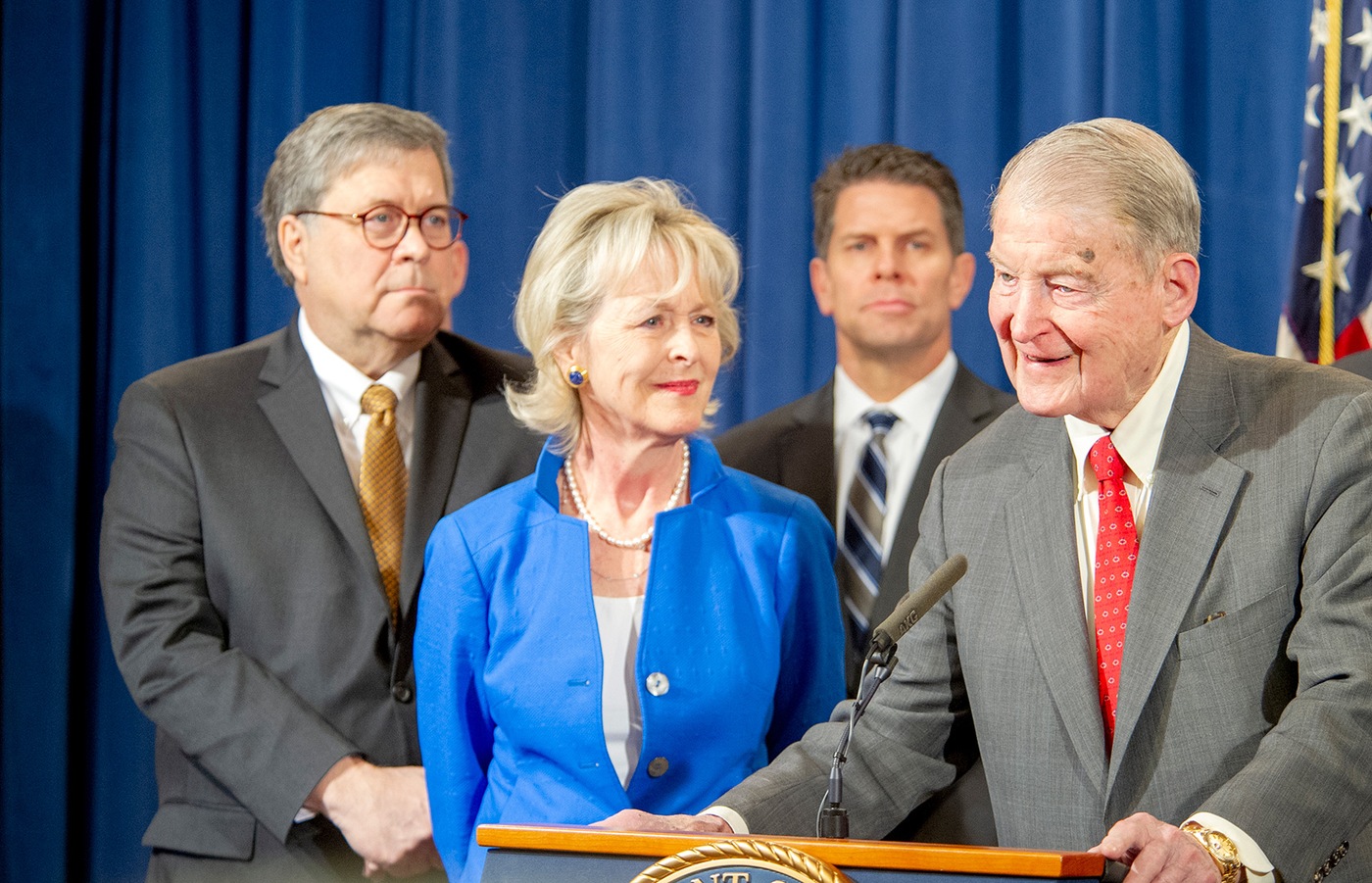 Former FBI Director William Webster—pictured with his wife, Lynda—speaks during today’s elder fraud press conference at the Department of Justice. The Websters were targets of a fraud scheme in 2014 and helped the FBI capture the subject. Also appearing at the press conference were Attorney General William P. Barr (left) and FBI Deputy Director David Bowdich.

The FBI joined federal partners and Attorney General William P. Barr today in announcing the results of a yearlong targeted effort to capture and prosecute fraudsters who prey on the elderly. Coordinated law enforcement actions in the past year, they said, resulted in criminal cases against more than 260 defendants who victimized more than 2 million Americans, most of them elderly. Losses are estimated to have exceeded more than $700 million.

“The people involved are vulnerable, and because of their stage in life, they don’t have the opportunity frequently to recover. And so these losses are devastating to them,” Barr said during a press conference at the Department of Justice in Washington, D.C.

The number of defendants, victims, and alleged financial losses exceeded last year’s figures, when the Department of Justice announced charges against more than 250 subjects and losses of more than $600 million. The targeted federal efforts were set in motion in 2017 with the enactment of the Elder Abuse Prevention and Prosecution Act, which included, among other things, enhanced penalties for telemarketers who target or victimize people over age 55.

Barr described a scam in which fraudsters used his own name and official photo from his previous time as attorney general to try to lure victims to pay to apply for a “government grant.” Barr said he received numerous calls as the scam circulated on social media and had to work with social media companies to have it taken down. “Some of the people were desperately hoping this was not a scam, and they were inquiring about my abilities to send them money,” Barr said.

Former FBI Director William Webster, 95, and his wife, Lynda, attended the press conference, not only as distinguished guests but also as victims of a fraudster who targeted them in 2014. A caller told the Websters they had won millions of dollars and a new car but they needed to pay thousands of dollars to cover shipping and handling. When the couple hedged, the caller made death threats.

“The people involved are vulnerable, and because of their stage in life, they don’t have the opportunity frequently to recover. And so these losses are devastating to them.”

The heavily accented caller who promised William Webster a grand sweepstakes prize of $72 million and a new Mercedes Benz had done most of his homework on his potential fraud target.

“I know that you was [sic] a judge, you was a lawyer, you was in the U.S. Navy,” the caller told his elderly mark. “I do your background check. You are a big man.”

What the caller, Keniel Thomas, 29, of Jamaica, missed was possibly the most salient detail about his intended victim, who was 90 years old the time: William Webster had served as director of both the FBI and the CIA, and so had a pretty good radar for pernicious criminal schemes—in this case, a Jamaican lottery scam. Read the full story﻿

The Websters were targeted in a Jamaican lottery scheme, one of a variety of scams designed to separate seniors from their money. Other common schemes include romance scams, which prey on lonely seniors, and technical-support scams, in which criminals call potential victims and trick them into providing remote access to their computers or devices.

“Our elder fellow citizens deserve our support and our protection, and we’re going to do everything we can to be sure they’re not defrauded and that they are protected,” William Webster said at today’s press conference.

The FBI has opened 66 economic crime investigations related to elder fraud since March 1, 2018, according to the Internet Crime Complaint Center (IC3), a web-based clearinghouse for complaints of suspected crimes facilitated by the Internet. Its data shows confidence fraud and romance scams aimed at the elderly accounted for more than $184 million in losses over the past year.

Technical-support fraud schemes have cost victims over age 60 more than $26 million since last March. The schemes generated more than 142,000 complaints last year to the Federal Trade Commission, with consumers over age 70 filing the most complaints.

Meanwhile, the FBI and its partners conducted more than 300 interviews and served scores of warning letters during a two-month sweep last fall aimed at “money mules”—people who conduct illegal financial transactions (sometimes unwittingly) on behalf of criminals. In some cases, seniors who have been tapped out of their money are then asked to help facilitate other transactions with the false promise of earning a lucrative fee.

Criminals target seniors because they tend to be more trusting, polite, and financially secure. They are also less likely to report a crime because of shame or embarrassment. That said, it is important to inform law enforcement, whether by reporting fraud to the FBI’s IC3, the Federal Trade Commission, or local or state authorities. That way, law enforcement can spot trends, warn the public about specific scams, and develop strategies to stop the fraudsters.

FBI Director Christopher Wray has made a visit to the National September 11 Memorial & Museum in New York City a required part of the curriculum for all new special agent and intelligence analyst trainees.

Former FBI Director William Webster discusses being the target of a Jamaican lottery scam and his role in the ensuing investigation that led to his fraudster’s arrest and conviction.