In National Archives footage, Lou Peters is interviewed about his role in the FBI’s case against the head of the Bonnano organized crime family. 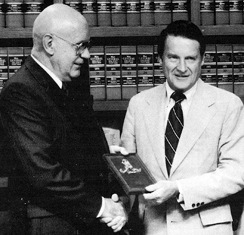 A man approached Peters expressing interest in buying the dealership. When told it wasn’t for sale, the man was insistent, telling Peters to “name any price.” Finally, Peters said he would sell it for $2 million—nearly twice what the business was worth. The man accepted—then told Peters that the buyer was none other than Joseph Bonnano, Sr., head of the Bonnano organized crime family, who wanted the dealership to launder the family’s illegal funds.

Initially taken aback upon learning of mafia involvement, Peters eventually agreed to the sale, recounting, “I didn’t understand why these people wanted to come into our county. And I wanted to find out.” He then went to a local police chief and told him what had happened. When the chief asked what he was going to do next, Peters replied, “Well, I’m going to the FBI.” Right: (Lou Peters, left, receives an award from FBI Director William Webster in 1980.)

And to the FBI he went, telling all. The FBI saw an opportunity to take down Bonnano and asked Peters for help. He was on board. “I felt it was the right thing to do, and I just did it,” he said.

Over the next nearly two years, Peters played the part of a corrupt businessman, gaining remarkable access to the Bonnano family and even becoming a close companion of Joseph Bonnano, Sr. To gain his confidence, Peters recalled saying something to “the old man” along the lines of, “Well, this should really bring me into the family”—to which Bonnano replied, “Lou, you’re already in the family.”

Through it all, Peters never took his eye off the ball—gathering evidence, secretly recording conversations, and debriefing agents on what he had learned. And his efforts weren’t without personal sacrifice…besides the risk to his life, he had to obtain a (temporary) legal separation from his wife not only to protect his family but also to have a credible reason to move out of his house—and into an apartment that was being monitored by the FBI.

In the end, Peters got what we needed. When he told Bonnano—during a recorded call—that he had been subpoenaed to testify before a grand jury regarding his dealings with the family, the old man directed him to destroy any records that could be linked back to him and his associates. Peters took the tape to the FBI agent on the case. While listening to it, the agent jumped up and said, “You got him!”

Thanks to Lou Peters, Joseph Bonnano, Sr. was found guilty of obstructing justice and sentenced to five years in prison—the first felony conviction in the mob boss’ long life of crime.

To show its appreciation, in October 1980 the FBI presented Peters with an award for his selfless and valiant actions…an award that has been granted annually for the past 30 years as the Louis E. Peters Memorial Service Award, bestowed upon the citizen who best exemplifies the standards set by Peters in providing service to the FBI and the nation.

Shortly before his death in 1981, Peters said, “I was very proud of what I did for my country.” The country is very proud of him, too. Thanks, Lou Peters.

The call came in to the Anchorage Field Office early on a Sunday morning in January 2010. An explosion had taken place at a Fairbanks residence, and a 21-year-old man had been seriously injured.