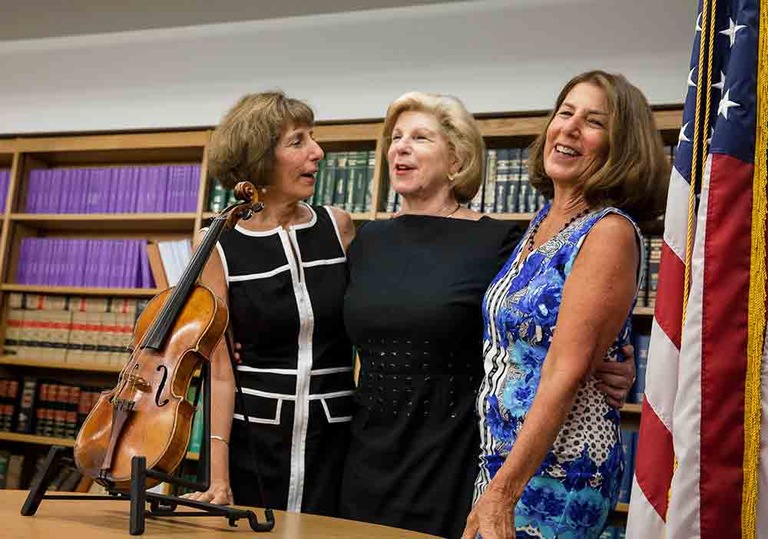 From left, Jill, Nina, and Amy Totenberg celebrate the return of their father’s Stradivarius violin, which was recently recovered after having been stolen in 1980.

The FBI returned a rare Stradivarius violin to the heirs of deceased violinist Roman Totenberg at a ceremony at the U.S. Attorney’s Office in Manhattan yesterday. The violin, made in 1734, was stolen in 1980. It was recently recovered by the FBI’s Art Crime Team, thanks to a tip passed on by a New York City Police Department detective. After having been missing for more than 35 years, the rare instrument surfaced at a Manhattan hotel in June, where it was being presented for appraisal by an individual who had received the violin from a former spouse. The appraiser contacted the FBI, and the individual voluntarily relinquished it. After contacting the heirs of Roman Totenberg, the U.S. Attorney’s Office and the FBI arranged for the return of the Stradivarius to the Totenberg family.

Two antique bows that were stolen along with the violin remain missing. Anyone with information related to this case is asked to contact the FBI’s Art Crime Team in New York at (212) 384-1000 or submit a tip.

A man who conducted multiple acts of sabotage was sentenced to 15 years in prison.

A look at the FBI’s involvement in an early election fraud case.