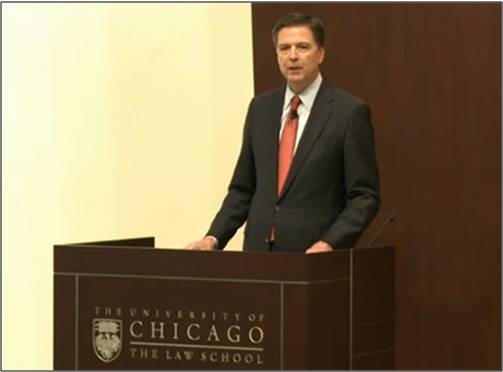 FBI Director James Comey speaks at the University of Chicago Law School on October 23, 2015, as part of his efforts to further the discussion on issues surrounding race and law enforcement.

Continuing his efforts to move forward the discussion of race and law enforcement, FBI Director James Comey met earlier today with law students, faculty members, and others at the University of Chicago Law School to talk about that issue and the broader “crisis of violent crime”—in particular homicides and shootings—taking place in some of the country’s most vulnerable communities over the past year. He reflected on possible factors fueling the crisis and the collective challenge faced by law enforcement and communities to address it effectively.

Discussing rising violent crime rates in many major U.S. cities so far in 2015, Comey said that he’s heard a lot of theories about what’s causing the increase. But the one explanation that makes the most sense to him is a possible change in policing behavior over the past year.

He asked, “In today’s YouTube world, are officers reluctant to get out of their cars and do that work that controls violent crime? Are officers answering 911 calls but avoiding the informal contact that keeps bad guys from standing around, especially with guns?” Comey believes that part of the behavior change should be welcome as “we continue to have important discussions about police conduct and de-escalation and the use of deadly force” and that “law enforcement will get better as a result.” But, he added, “we can’t lose sight of the fact that there really are people standing on the street with guns,” and that “lives are saved when those potential killers are confronted by a strong police presence and actual, honest-to-goodness, up close ‘What are you guys doing on this corner at one o’clock in the morning?’ policing.”

Comey also talked about the need for better data to gain a better understanding of what’s happening in communities—data related to violent crime and homicides, officer-involved shootings, altercations with citizens, and attacks against law enforcement officers. He continued to advocate for all law enforcement agencies to report this type of data to the FBI through its National Incident-Based Reporting System.

In an effort to get a handle on the violence threatening many communities around the country this year, Comey told participants that law enforcement and the public they serve must talk and listen to each other about “the state of our communities, the state of policing, and the state of our relationships.” His advice to the students he was speaking to? “We have to resist stereotypes. We have to look for information beyond anecdotes. And we must understand that we need each other.”