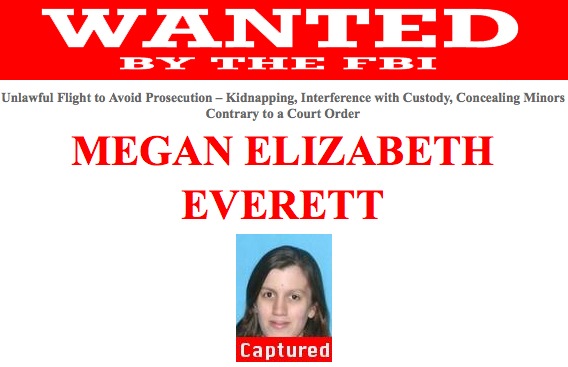 A tip called in during the CNN program “The Hunt with John Walsh” on August 2, 2015 led to the safe recovery of 3-year-old Lilly Abigail Baumann and the arrest of her mother, Megan Elizabeth Everett, on parental kidnapping charges.

In May 2014, officers from the Sunrise Police Department responded to a report of a parental kidnapping. Everett failed to return her daughter to the girl’s father as directed in their custody agreement. After a thorough investigation and efforts to locate the child, Sunrise Police Department officials believed she had left their jurisdiction with her daughter and requested assistance from the FBI Miami Office’s Violent Crimes Task Force.

The FBI—with its partners at the Sunrise Police Department— continued to work the case to track down Everett and her daughter, following up on tips and sending out leads. On August 2, 2015, Everett’s case was featured on the CNN program The Hunt with John Walsh. During the program, Bureau representatives helped staff a call center accepting incoming tips from the public. During one such phone call, real-time FBI analysis was able to determine the validity of the information offered by the tipster, and the following morning, investigators were able to locate Everett and her daughter at a residence in Palatka, Florida. Everett was taken into custody without incident, and Lilly was placed into protective custody. The 3-year-old was reunited with her father a short time later.

A look at the FBI’s involvement in an early election fraud case.